Written by Alexander Stemp
A pleasant jaunt to the hilly part of District III, along the busy Szépvölgyi út up to the forests, also leads to the Minszk tér pilgrimage site at Virág Benedek utca, as well as to the Belarus Embassy close by.

Various “white-red-white” testimonials and flowers can be seen respectfully arranged within this immediate area, and they should require no further explanation, representing the ongoing Belarus protests against the recent suspect presidential election. But, it can be pointed out, Belarus flies two distinct flags.

There is the “popular” horizontal white-red-white striped flag, which has been in and out of favour. When the Belarusian People’s Republic was declared in March 1918, the white-red-white tricolour became its national flag. During the Soviet period, the official flag of the Byelorussian Soviet Socialist Republic was initially a plain red one, but it ended up as a red-and-green design with a decorative pattern on the left side and a golden hammer and sickle. Meanwhile, the white-red-white flag remained in use among émigré organisations.

After the collapse of the USSR, independent Belarus adopted the white-and-red tricolour once again. However, during a referendum in 1995, the majority of Belarusian citizens voted for the restoration of the Soviet era red over green bicolour, without the hammer and sickle (in addition to some other minor changes). 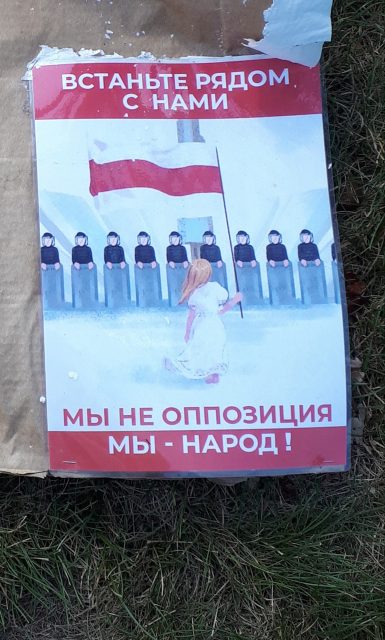 The Belarusian opposition actively uses the white-red-white flag to this very day. At first it was only used by patriotic nationalists but it eventually became a symbol for anyone actively opposing the despotic Alexander Lukashenko, elected President in 1994.

It is viewed as a symbol of freedom and is waved by anti-government supporters, demanding the dictator end his 26-year rule and step down immediately, without further terrorising peaceful protesters.

But still now is the perhaps better known, official red and green flag with its white-and-red decorative embroidery pattern on the left side, as dutifully flown by the embassy in Budapest and other Belarusian embassies worldwide today.

Whatever the outcome of the current protests against Lukashenko in Minsk and other cities, August 2020 will be remembered as the time of a demand for change by tens of thousands of Belarusians. They remain under the watchful eye of the national – well-armed – authorities, as well as the nation itself being kept under observation by the Russian President, Vladimir Putin.

Sitting at a geographical and political crossroads between East and West, Belarus awaits its next move, perhaps a new era if victory is in the opposition’s grasp.