Croatian Embassy and National Tourist Board celebrate at botanical garden

Written by Alexander Stemp
The sixth anniversary of Croatia’s “Fig Day” was hosted by the country’s Ambassador to Hungary, Mladen Andrlic, at the ELTE "Füvészkert" Botanical Garden in Budapest’s District VIII on September 30. 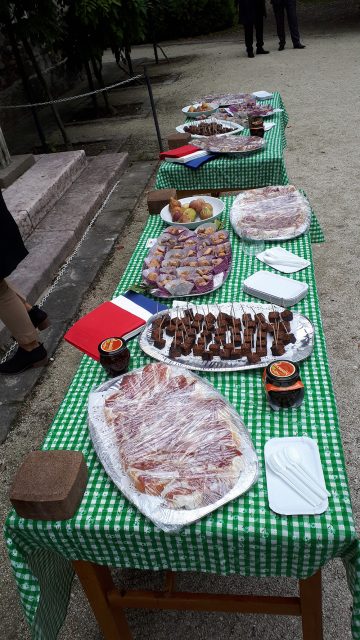 About 50 attendees mostly from embassies, the media and tourism groups gathered. They heard Ivana Herceg, the Hungarian director of the Croatian National Tourist Board, touch on the traditional and cultivation aspects of life and values of the fig fruit and trees in Croatia and the Mediterranean in general, and how relevant this is as a culture as well as a commodity today.

It was noted that fig trees from the Croatian coastline have been exclusively delivered to the ELTE Botanical Garden as a token of goodwill.

Alexander Stemp writes: This delightful midday event, in this equally elaborate setting, despite mask-wearing and threats of rain, was well received by the small but enthusiastic crowd. The occasion rounded off with fig-related refreshments and samples, with the knowledge that there will be more splendid Croatian figs available here in Hungary in the future.