Demonstration in solidarity with Belarus

Written by Alexander Stemp
This rally to show solidarity with Belarus and pay tribute to the ongoing protests took place at Kossuth Lajos tér/Parliament Square on September 9 and had thus been deliberately scheduled for exactly one month after the disputed Belarusian presidential election of August 9. This latter has resulted, as the world knows, with an all-out crisis and ongoing mass demonstrations. 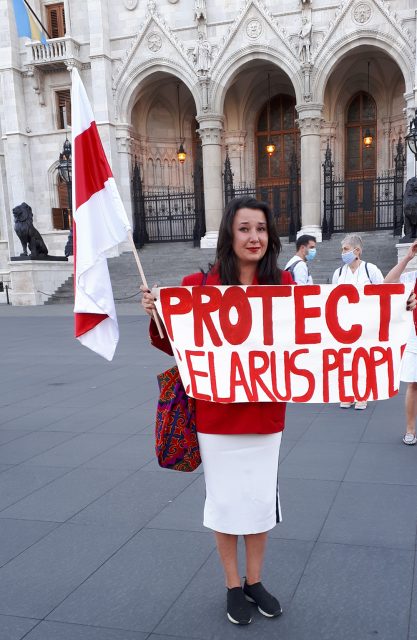 The opposition to Alexander Lukashenko disputes his claim to have won with 80.1 percent of the vote and demands he step down after 26 years of dictatorship. Apart from the alleged electoral fraud, the demonstrators are angry about police violence against peaceful protestors after they were detained. They also fear a possible loss of independence should Vladimir Putin’s Russia use the opportunity to step in and assist Lukashenko.

The peaceful protest in Budapest was hosted by the local Belarus community. Many of the supporters were dressed in white and red to represent the Belarus “Freedom Flag”. The event opened with a speech by Belarusian Anna Mazurkevics, who highlighted the obvious plight in eloquent English. Other presenters then translated her message in Hungarian, Belarusian and Russian.

In addition, Budapest Deputy Mayor Gábor Kerpel-Fronius and Member of the European Parliament Anna Júlia Donáth both made brief appearances.

A moment’s silence was held for Belarusian protestors who have died in clashes with riot police. A candle-lightening ceremony took place, followed by the singing of Belarusian songs. All came with a clear message to stop the violence in Minsk and other cities and to bring new and appropriate changes.

Anna Mazurkevics said in her address: “We are here today because exactly one month ago, as we all know, terrible events took place in our motherland. We wanted a free and fair election. The magority wants a new president. We wanted to show the world the nation has a voice and we wanted to speak out against oppression. But we already knew the outcome. 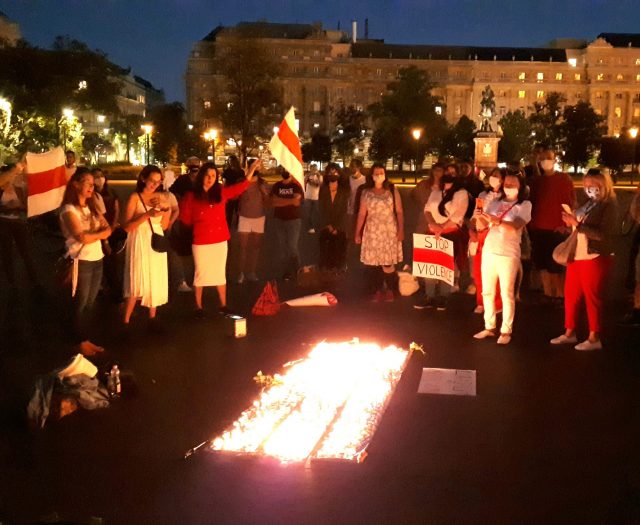 “After the results of the August 9 election came through it was clear that fraud had taken place.  Thousands of people then took to the streets, not only in the capital Minsk  but all over the country. As the country wanted to unite in peaceful unison, and to see the general demands for our rights are to be peacefully heard and respected.

“Regrettably, the peaceful demonstarations turned violent. The police started to use much aggressive force, as they went about their way by terrorising people and throwing them in prison. As ordered by the authorities to restrict, intimidate and  detain them.

“I am not afraid to say this but it’s clear: fascism is happening now. My friends and relatives cannot walk the streets of Minsk. They are too afraid they will be snatched at random by masked men at any one time for no real  reason, even when at the shops. Then forced into unregistered vehicles,  driven off and disappear.

“As of now there are four civiliians who have been killed. There are six people who are recorded as missing. There are over 7000 people still in prison and being abused. We have 450 cases which have been presented to the UN, which officially states that torture has been in use and is continually ongoing today.

“It is not safe to be in Belarus. The power has been taken from the people by this unlegitimate president, who is selling our country, who is beating and torturing people, who is surveilling the streets by helicopter and waving a Kalashnikov rifle, and trying to prove what? We don’t know.

“We want all violence in Belarus to stop, we want to have a re-election conducted fairly. We want to have all political prisoners released immediatly and we want to live in a peaceful, prosperous country with a better, brighter future”.