Exclusive extract: read the first chapter of A ‘Promised Land’ by Barack Obama

Working – and living – at the White House

Written by Barack Obama
Of all the rooms and halls and landmarks that make up the White House and its grounds, it was the West Colonnade that I loved best.

For eight years that walkway would frame my day, a minute-long, open-air commute from home to office and back again. It was where each morning I felt the first slap of winter wind or pulse of summer heat; the place where I’d gather my thoughts, ticking through the meetings that lay ahead, preparing arguments for skeptical members of Congress or anxious constituents, girding myself for this decision or that slow-rolling crisis.

In the earliest days of the White House, the executive offices and the First Family’s residence fit under one roof, and the West Colonnade was little more than a path to the horse stables. But when Teddy Roosevelt came into office, he determined that a single building couldn’t accommodate a modern staff, six boisterous children, and his sanity. He ordered construction of what would become the West Wing and Oval Office, and over decades and successive presidencies, the colonnade’s current configuration emerged: a bracket to the Rose Garden north and west — the thick wall on the north side, mute and unadorned save for high half-moon windows; the stately white columns on the west side, like an honor guard assuring safe passage. 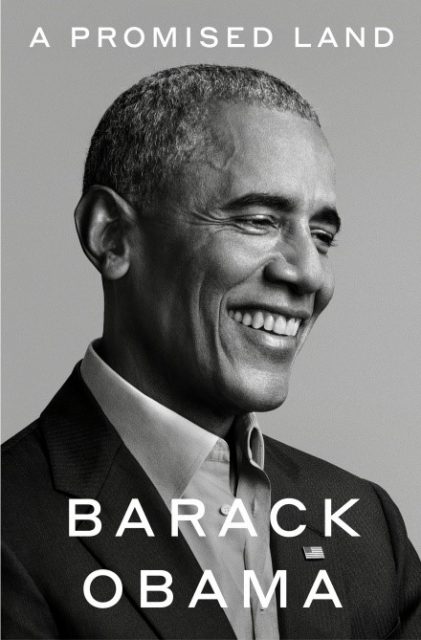 As a general rule, I’m a slow walker — a Hawaiian walk, Michelle likes to say, sometimes with a hint of impatience. I walked differently, though, on the colonnade, conscious of the history that had been made there and those who had preceded me. My stride got longer, my steps a bit brisker, my footfall on stone echoed by the Secret Service detail trailing me a few yards back. When I reached the ramp at the end of the colonnade (a legacy of FDR and his wheelchair — I picture him smiling, chin out, cigarette holder clenched tight in his teeth as he strains to roll up the incline), I’d wave at the uniformed guard just inside the glass-paned door. Sometimes the guard would be holding back a surprised flock of visitors. If I had time, I would shake their hands and ask where they were from. Usually, though, I just turned left, following the outer wall of the Cabinet Room and slipping into the side door by the Oval Office, where I greeted my personal staff, grabbed my schedule and a cup of hot tea, and started the business of the day.

Several times a week, I would step out onto the colonnade to find the groundskeepers, all employees of the National Park Service, working in the Rose Garden. They were older men, mostly, dressed in green khaki uniforms, sometimes matched with a floppy hat to block the sun, or a bulky coat against the cold. If I wasn’t running late, I might stop to compliment them on the fresh plantings or ask about the damage done by the previous night’s storm, and they’d explain their work with quiet pride. They were men of few words; even with one another they made their points with a gesture or a nod, each of them focused on his individual task but all of them moving with synchronized grace. One of the oldest was Ed Thomas, a tall, wiry Black man with sunken cheeks who had worked at the White House for forty years. The first time I met him, he reached into his back pocket for a cloth to wipe off the dirt before shaking my hand. His hand, thick with veins and knots like the roots of a tree, engulfed mine. I asked how much longer he intended to stay at the White House before taking his retirement.

“I don’t know, Mr. President,” he said. “I like to work. Getting a little hard on the joints. But I reckon I might stay long as you’re here. Make sure the garden looks good.”

Oh, how good that garden looked! The shady magnolias rising high at each corner; the hedges, thick and rich green; the crab apple trees pruned just so. And the flowers, cultivated in greenhouses a few miles away, providing a constant explosion of color — reds and yellows and pinks and purples; in spring, the tulips massed in bunches, their heads tilted toward the sun; in summer, lavender heliotrope and geraniums and lilies; in fall, chrysanthemums and daisies and wildflowers. And always a few roses, red mostly but sometimes yellow or white, each one flush in its bloom.

Each time I walked down the colonnade or looked out the window of the Oval Office, I saw the handiwork of the men and women who worked outside. They reminded me of the small Norman Rockwell painting I kept on the wall, next to the portrait of George Washington and above the bust of Dr. King: five tiny figures of varying skin tones, workingmen in dungarees, hoisted up by ropes into a crisp blue sky to polish the lamp of Lady Liberty. The men in the painting, the groundskeepers in the garden — they were guardians, I thought, the quiet priests of a good and solemn order. And I would tell myself that I needed to work as hard and take as much care in my job as they did in theirs.

With time, my walks down the colonnade would accumulate with memories. There were the big public events, of course — announcements made before a phalanx of cameras, press conferences with foreign leaders. But there were also the moments few others saw — Malia and Sasha racing each other to greet me on a surprise afternoon visit, or our dogs, Bo and Sunny, bounding through the snow, their paws sinking so deep that their chins were bearded white. Tossing footballs on a bright fall day, or comforting an aide after a personal hardship.

Such images would often flash through my mind, interrupting whatever calculations were occupying me. They reminded me of time passing, sometimes filling me with longing — a desire to turn back the clock and begin again. This wasn’t possible on my morning walk, for time’s arrow moved only forward then; the day’s work beckoned; I needed to focus on only those things to come.

The night was different. On the evening walk back to the residence, my briefcase stuffed with papers, I would try to slow myself down, sometimes even stop. I’d breathe air laced with the scent of soil and grass and pollen, and listen to the wind or the patter of rain. I sometimes stared at the light against the columns, and the regal mass of the White House, its flag aloft on the roof, lit bright, or I’d look toward the Washington Monument piercing the black sky in the distance, occasionally catching sight of the moon and stars above it, or the twinkling of a passing jet.

In moments like these, I would wonder at the strange path — and the idea —that had brought me to this place.