“The Goldfinger Files. The Making of the Iconic Alpine Sequence in the James Bond Movie ’Goldlfinger’” by Steffen Appel and Peter Waelty (published by Steidl)

Written by BT
James Bond film number 27 will appear this November, and of the 26 so far since “Dr No” in 1962, “Goldfinger” is consistently rated one of the very best – number one (Rotten Tomatoes, Rolling Stone), second-best (the Guardian, the Independent, Reader’s Digest), third (ScreenRant) and, surprisingly perhaps, sixth (GQ). For many Bond fans and film aficionados, “Goldfinger” had it all: a fabulous cocktail of high-octane action that was also tremendous fun, with great casting and terrific locations in England, the US and Switzerland. The latter is the subject of this excellent book. 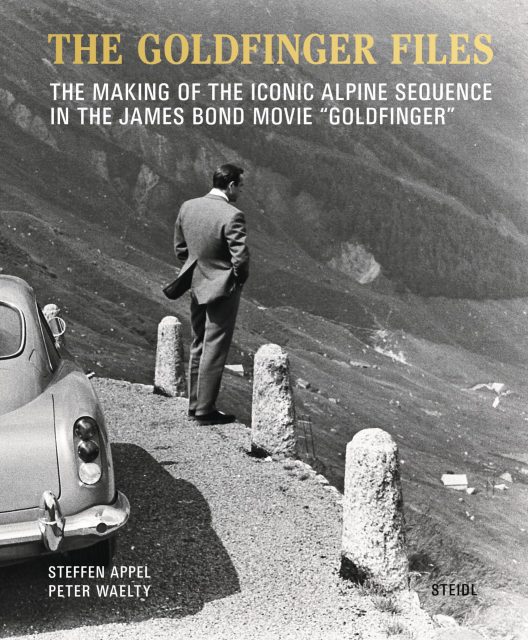 British author Ian Fleming, a former naval intelligence officer, had written six James Bond books before “Goldfinger” was published in England and America in 1959, and in its pages Bond sneaks a Homer tracking device into the tool compartment of a Rolls-Royce Silver Ghost that will be flown from Ferryfield (now Lydd) Airport in England to Le Touquet in France by Auric Goldfinger, whom the Bank of England suspects is somehow smuggling gold out of the country.

The hidden transmitter can be followed within 100 miles and Bond, in an Aston Martin D.B.III, sets off in pursuit, down through France and into Switzerland. So far the film, made in 1964, stays broadly faithful to the book, but now “The Goldfinger Files” takes up the story from Fleming as we arrive at Andermatt in the rugged and spectacularly scenic Urseren Valley.

Various Swiss mountain regions had been scouted as possible film locations for the exciting alpine sequence, and the book recounts that it is unlikely the choice fell on Andermatt because of the welcoming nature of the local hotel industry.

Rather, the production manager for film company EON Productions, Leonard C. Rudkin, had contacted the tourist office in Andermatt only to find that most of the hotels declined to accommodate the 50-strong film crew. The hotels had plenty of guests anyway, they did not know the two earlier James Bond films and they were worried that the British wouldn’t pay properly (some past experience, presumably).

Finally, Madeleine Freyberg of the Hotel Bergidyll rented them the whole place from cellar to loft, leading the other hotel owners to scoff, predicting money trouble ahead. In fact, payment was transferred in full in advance. Excellent period photos of Hotel Bergidyll are seen in Steffen Appel’s and Peter Waelty’s book, including the very 1960s-looking dining room and the hotel lobby with its open stone fireplace.

Also shown are the house band, the Blue Hammond’s (sic), a besuited, neatly trimmed trio who made the Bergidyll the in-place of the region, as few other venues had nightly music and a large room to dance. The group –  Horst, Guggi and Tury – also fed the crew on location each day, using their battered Volkswagen bus to deliver lunch prepared by the hotel kitchen to cast and crew out on location.

In those “simpler” times,  the actors and crew are seen lunching sitting or lying in the alpine grass, eating off paper plates with plastic cutlery. (Tell that to Daniel Craig?)

The British team was in the Urseren Valley from July 5-12 for a sequence that actually lasts six minutes and 37 seconds on screen. After the surprise success of the first Bond films, “Doctor No” in 1962 and “From Russia With Love” in 1963, “Goldfinger” was allocated a sizeable USD 3 million budget, and to bring it in on time a seasoned pro, Guy Hamilton, was hired to direct. He employed a tongue-in-cheek, high thrills style on locations in England, Miami and Kentucky in the US and the Swiss Alps.

Wisely, journalists and photographers were constantly allowed on location, generating great pre-publicity for the fledgling series of films. This has allowed Steffen Appel’s and Peter Waelty’s book to compile a proverbial treasure trove of great photographs and tremendous trivia. First we see the arrival of English actress Tania Mallet, 23, at Zurich-Kloten Airport, a top model who will play Tilly Masterston, bent on avenging the murder of her sister Jill, who had been memorably painted gold all over for betraying Goldfinger, and thus suffocating.

More photos show Mallet being greeted by Hawaiian wrestler Toshiyuki “Harold” Sakata, the muscle mass who won a weightlifting silver medal at the 1948 Olympics. Sakata would play Oddjob, he of the deadly steel-brimmed bowler hat and crusher-of-golf-balls-in-his-bare-hands. Sakata hoisted Mallet in his arms for the benefit of the dozen journalists waiting on the runway.

Five hours later, photos show the arrival at the airport of Sean Connery, no introduction needed. The tattoos on his arm (“Scotland forever” and “Mum and Dad”) were visible but Appel and Waelty explain that they would be covered during filming, as would his wedding ring, which he wore throughout.

Connery was immediately driven to Andermatt, a three-hour trip through countless villages in 1964 motorway-free Switzerland. The caption to the photo of the Bergidyll lobby reveals that 10 telephone lines were installed for the crew, and Connery is said to have called his wife, actress Diane Cilento, each night in Rome, where she was filming.

Great photos show the Brits gathered for dinner and earning a reputation for knowing how to handle their alcohol. Connery, seen in these private pictures without his toupee, went to bed at 3am every day and had to get up at 7am, according to one account, consequently being hungover for filming in the valley.

But he is generally praised for being a warm and friendly fellow, without airs and up for fun. And did he bed waitress Irmgard? There had been “discreet glances” between them, and the chambermaid found long black hairs in his bed one morning.

And so it is all here for the most rabid James Bond enthusiast: 346 colour and black-and-white images in a 192-page book, including some of the original typed screenplay, autographed menus and so on. Here are Goldfinger’s black-and-yellow Rolls-Royce Phantom III (not the Silver Ghost of the book) on the dusty mountain road, Tilly Masterson’s failed attempt to shoot him, the clash between her Mustang (not the Triumph TR3 convertible of the book) and Bond’s Aston Martin, Connery’s and Mallet’s stunt doubles, and Goldfinger’s smelting factory where the smuggled gold, disguised as actual parts of his car, was removed and melted down. This latter building was in fact the Pilatus Aircraft Works at Stans in the canton of Nidwalden.

As every 007 fan knows, Q, the British Secret Service quartermaster, had stuffed the Aston Martin full of deadly gadgets – its bulletproof shield, extendable bumper parts, revolving number plates, twin Browning machine-guns, tyre slashers, ejector seat for bad passengers and so on – quickly made it the most famous car in the world. But one amusing fact emerges: unfortunately, the first Aston Martin in Switzerland for filming had a faulty clutch and a replacement had to be flown out.

Footnote: Ian Fleming visited the set of “Goldfinger” at Britain’s Pinewood Studios little more than a month before its premiere in London’s West End, on September 17, 1964. A heavy smoker and drinker, Fleming succumbed to heart disease on August 12, 1964 aged 56, just before Bondmania kicked into high gear and became a spectacular international success.