“I Wanna Be Yours” by John Cooper Clarke (published by Picador)

What larks from one of poetry’s patriarchs

Written by Christopher Osterberg
John Cooper Clarke may wanna be ours but he’s a bit late. He doesn’t know it but he’s been ours pretty much right from the beginning, when his wild poetry wended its way into our attention at the height of the punk music outbreak in 1977. We immediately dug his wicked wordsmithery, his Dylan-circa-1965-66 flyaway hair, his night-and-day shades and his drainees (drainpipe trousers). Anyone who could hone a humorous bit of bile like “Like a recently disinfected shithouse you’re clean around the bend” was instantly ours.

In fact, a bit of an odd thing happened with us and John Cooper Clarke in the early 1980s. Your Budapest Times correspondent was then living in Sydney, Australia, and had gone on a holiday to homeland England. On the last night there, he went with a friend to see Cooper Clarke, the so-called “punk poet”, perform his rapid-fire readings at London’s famed Marquee Club.

The next day your correspondent flew back to Sydney … and within a day or two was again watching JCC perform there. Ever since, we’ve been amused by the thought that perhaps the two of us were on the same flight – but if so, how could we have missed seeing the bard’s back-combed barnet sticking up over the top of a seat in economy class?

It’s unlikely that the Australian tour promoters sprang to Business Class. In an interview on Australian television, JCC artfully turned the conversation to “the dreadful hotels these promoters have been putting me in. I went to see the manager last night, I said I’ve come to see you about the roof. He said what about it? I said I want one. I said I’ll have pneumonia in the morning. He said you’ll have cornflakes like everybody else”.

The poet then read out his poem “Twat”, a prolonged pillorying of an unfortunate protagonist a la “Positively Fourth Street”/”Ballad of a Thin Man” containing the “disinfected shithouse” line and “You put the pain in Spain”, but he self-censored the bit about “You put the cunt in Scunthorpe” to spare the sensibilities of the delicate Down Under television viewers.

On his visits to Australia we saw him at the Trade Union Club, date forgotten, probably 1983, and with the newish New Order at the Capitol Theatre in November 1982, both in Sydney. Armed only with a microphone and his book of poetry, he was hilarious and endearing, rattling off his mostly brilliant poems in a strong Mancunian accent and at punk-speed requiring frequent half-pauses for breath, all from inside a cloud of cigarette smoke as if he had to get out his lines before expiring from lung cancer. 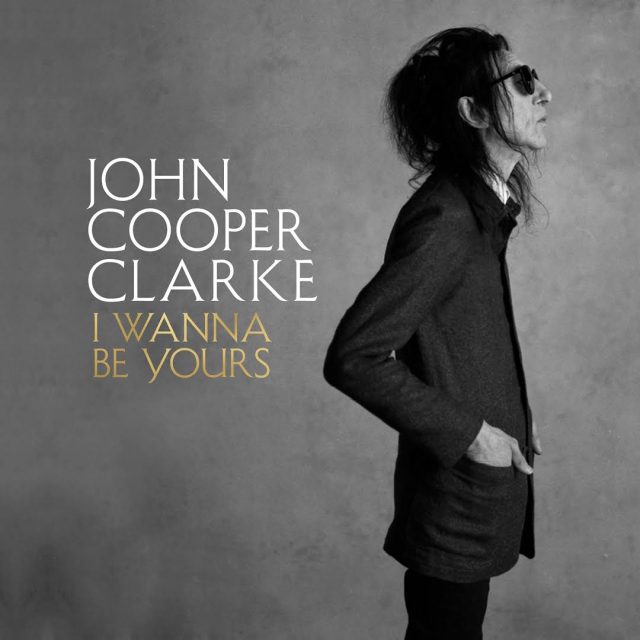 We had his two books, “Directory 1979” and “ten years in an open necked shirt”, and marvelled at his versifying: “Expert eyes scrutinize”, “ Beans, greens, tangerines and low cholesterol margarine… He’s a health fanatic, makes you sick”, “I fell in love with an alien being… She pissed off to another age, She lives in 1999, With her new boyfriend, a blob of slime, Each time ÍI see a translucent face, I remember the monster from outer space”. And many more bons mots in tow.

All this evolved from Hope Hospital, Salford, where Cooper Clarke was born in 1949 into the blue-collar population of the heavy-industrial metropolis of Manchester, UK. It was austerity Britain, four years after the end of the war, and he never saw a banana until he was five.

Salford had been bombed heavily and still showed the damage. His home looked out on an extremely busy intersection and the Rialto cinema, the latter being one of half a dozen within walking distance, and films were his life. From atop his home the view was “Coronation Street” for a million miles into the smoky distance.

JCC says he never felt deprived. His birthdate was one year before that of your Budapest Times correspondent, also born in England but a lot further south, and now here in Budapest 70 years later his childhood as detailed in this autobiography is immediately recognisable in many ways: Rupert the Bear annuals, Beano, Dandy and Eagle comics, “Have a Go” with Wilfrid Pickles on the radio, Alma Cogan and her hit with the verse “The railroad runs through the middle of the house”, Flash Gordon and Congo Bill in matinees at the many cinemas, and so on.

Cooper Clarke says he always knew he wanted to be a professional poet, and he devoured newspapers, magazines and literature from an early age, including the “Classics Illustrated” 64-page, comic-book versions of the works of Verne, Twain, Dumas, Hugo, Dickens and so on. Even if he hadn’t yet read the real things, his literacy was on the rise.

The budding poet loved his mum and dad and most other family members, Uncle This and Auntie That. He grew up in the largely Jewish neighbourhood of Higher Broughton (“Had I seen “Schindler’s List”? I was on Schindler’s List – Dr Schindler my dentist, that is”), not far from central Manchester.

When Mum went shopping, she plonked him at the Rialto, producing a lifelong passion for films. The bookish boy survived a bout of tuberculosis and school, where he displayed a “lack of team spirit”. He immersed himself in Mad magazine, comic books and pulp fiction, not to mention clothes, music, adverts, hair styles, modern art, football and show business.

He was, inter alia, a bookie’s runner when still a schoolboy, a garage grease monkey, a lab technician at Salford Technical College, an apprentice cutter at a tailor’s, a trainee compositor at a printworks, a caretaker and a fire watcher at a royal naval dockyard. He was also a shoplifter and a raider of chemists to feed his burgeoning drug habit.

JCC began writing verse, inspired by Baudelaire, the American songbook and “The Mersey Sound” of poets Roger McGough, Adrian Henry and Brian Patten. Bernard Manning, the owner of Manchester’s roughneck Embassy Club, was the first to pay him cash for performing. He could handle the hostility and aggro of the audience but not “indifference” – if he could hear the punters talking he knew the game was up.

In the mid-1970s, Clarke found himself recruited as house poet of the punk wave; he befriended the Clash, toured with Elvis Costello and found soulmates in Mark E. Smith of The Fall, Linton Kwesi Johnson and Richard Hell of the Voidoids. He supported such punk acts as the Sex Pistols and Siouxsie and The Banshees before going on to top the bill himself.

Needing money to “sort himself”, he was always available for touring, either at home or abroad. Shooting up three times a day allowed him to live “like a normal citizen”. Three times his habit nearly killed him. In Auckland, New Zealand, a nurse brought him back from the dead with a punch to the heart. He shared rooms in a Brixton house with fellow addict Nico, formerly of the Velvet Underground.

Cleaning up in the early 1990s, he was awarded an honorary doctorate by the University of Salford and his “Evidently Chickentown” featured in “The Sopranos”. “I Wanna Be Yours”, “Beasley Street” and “Twat” were included on the English Literature syllabus of the British education system. Dare we say it? John Cooper Clarke has grown to some sort of British national treasure status, aided along by a reverential BBC documentary.

His book is very detailed and mostly fairly straight but with some sneaky humour – “That was the night we called it a day,” he says of one failed relationship, or “I’m no detective (unless you count those thirty years I spent working in Socotland Yard’s Forensic Division).”

Thank heaven for oddball people like John Cooper Clarke who share their talent. We don’t know where they spring from but it is to our great fortune that they do. “What larks,” he remarks (spot the slyly slipped-in reference to Charles Dickens’ “Great Expectations”)