“The Black Book. The Britons on the Nazi Hitlist” by Sybil Oldfield (published by Profile Books)

To be exterminated, or ’disappeared’

Written by Christopher Osterberg
Why, Sybil Oldfield wondered while visiting the National Portrait Gallery in London in 2014 to see an exhibition on Virginia Woolf, did the display include a facsimile of a page from the “Black Book – the List of Britons Most Wanted for Arrest by the Gestapo”? If Germany had occupied Great Britain in the Second World War, why would the Nazi’s murderous secret police target this modernist novelist? And who were all the other names listed with her on the same page?

Oldfield’s questions eventually led to her embarking on her own book – a book about a “book”, for the Gestapo’s “Black Book” was anonymous, had no publisher and it was stamped “GEHEIM!” (SECRET!). It was compiled in German by the Geheime Staatspolizei (Secret State Police) and their informants at some time between 1936-7 and July 1940 in readiness for a German invasion of Britain. Oldfield describes her resultant book as the first serious attempt to identify, classify and analyse a significant sample of the hundreds of anti-Nazi men and women, both British-born and refugee, to be targetted by the Nazis.

The code name for Adolf Hitler’s planned invasion of Britain was Operation Sea Lion and it was supposed to take place in September 1940. But it was largely dependent on the Luftwaffe defeating the Royal Air Force first, and after the German pilots were defeated in the Battle of Britain over south-east England, Hitler turned instead to the Blitz of Britain’s cities and to an ill-fated invasion of Soviet Russia.

The Nazis believed that their thousand-year Reich would save the world from Jewish/capitalist/Bolshevik/Masonic domination. Britons who cooperated with their occupiers would be safe but anyone who stood in opposition would be hunted down, probably to be exterminated, “disappeared” or incarcerated in a British concentration camp. 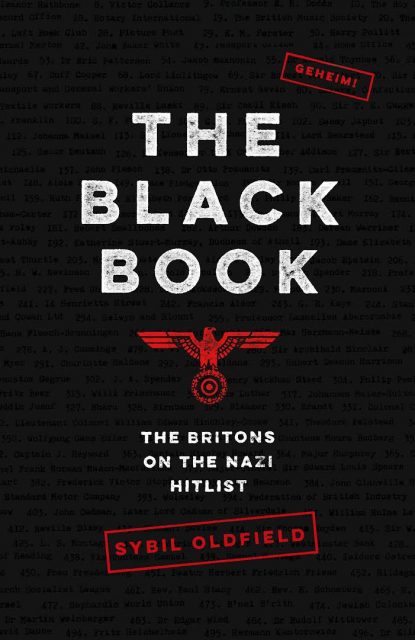 Oldfield’s quest began with her realisation that almost every one of the Gestapo’s targets had been what she calls a hero of humanity. Ironically, she writes, “many of the alleged ‘enemies of Germany’ were being excoriated in Britain for not being enemies of Germany – because they urged the cessation of bombing of German civilians, the feeding of starving Germans after the war and support for a new, revived, democratic and humane Germany”.

In Germany itself, the leading pacifist spokesman had been Otto Lehmann-Russbueldt, who had published attacks on the armaments industry, both multinational and German, and on Germany’s secret aggressive rearmament, leading him to be one of the 33 Germans who were the very first to be stripped of their nationality in August 1933. Hitler had risen to power in the depressed country in 1932-33.

The Gestapo anticipated resistance from the British peace groups for, as Oldfield remarks, “they were a troublesome lot who would never have cooperated with an exterminatory, racist, military dictatorship running a thousand-year Reich”.

The anti-militarist Vera Brittain found herself extremely unpopular in wartime Britain when she wrote that Britain must not, by indiscriminately bombing German civilians, perpetrate atrocities worthy of the Nazis. This earned her obscenities and dog faeces in her mailbox, so it was a great relief for her to discover, in September 1945, that she too had been on the Black List – the Nazis had recognised that non-violent women resisters, whose values were the opposite of their own, would be as implacably anti-Nazi as any resistant, armed British men.

Oldfield focuses on two parts of the “Black Book”. First is the Sonderfahndungliste GB, ie the Most Wanted List for Arrest in Great Britain, compiled circa 1937-September 1939, with some 2619 names of men and women, mostly with their addresses, to be arrested and interned in camps or placed under house arrest at once, if not executed, and nearly 400 British “Behoerden”, “Firmen” and “Vereinigungen (institutions, businesses, organisations and associations) to be proscribed, their papers seized and their mostly British-born leaders arrested.

Second, the “Informationsheft GB”, compiled May to July 1940 as an introductory handbook on Britain for the occupation troops, mentioning many leading individuals who would require surveillance and probable arrest.

They were writers, social reformers, refugee rescuers, artists, humanitarians, politicians, religious leaders, creative writers and their publishers, scientists, journalists, businessmen and industrialists, “degenerate artists”, freemasons, economists, historians, soldiers, spies and so on. Jews and non-Jews alike. More than half the targets were naturalised refugees, many having been driven into exile when Hitler began his autocratic reign of terror.

Woolf, for instance, and other outspoken anti-fascist British women feminists were the British counterparts of the German anti-militarist, anti-Nazi feminists whom the Nazis had branded “pacifist hyenas”. One of Woolf’s observations was that “We Can Fight with the Mind”. Her husband Leonard, also a man of letters, was listed too.

From the Nazis’ point of view, any Briton active in rescuing refugees from 1933 to 1940, whether they were native or “naturalised” British, were committed anti-fascists. Germany’s enemy’s friend was their enemy, and all would face retribution after the invasion. What motivated the Gestapo, Oldfield writes, was an urgent need to identify leading, publicly declared British anti-Nazis. “That these particular anti-Nazis had, in their turn, been motivated by revulsion against Nazi inhumanity, was irrelevant.”

Basically, the Nazis had the whole social fabric and culture of Britain in their sights. They would suppress the dissemination of any ideas hostile to fascism, to war and to Hitler’s megalomania.

Sybil Oldfield’s book is extremely thorough, explaining who scores and scores of these people were and why seemingly innocuous organisations caused trepidation among the worst Germans. In Nazis eyes, humanism in the form of succour, compassion or fellowship made absolutely no sense and was inapplicable to the new Germany.

For instance, the secret Nazi involuntary “euthanasia” regime, Aktion T4, authorised by Hitler on September 1, 1939, targeted the senile, the mentally handicapped, epileptics, the physically disabled and children with Down’s Syndrome. Between September 1939 and August 1941, 70,000 people were murdered in Germany and Austria for being “useless eaters” – unfit to live.

Refugee doctors made indispensable contributions to medical research in Britain in the 1930s, 1940s and beyond, and their findings covered a huge range of afflictions. The advent of German and Austrian doctors in Britain absolutely transformed psychiatry, for example, reaching out to help seemingly hopeless cases but whom in Nazi eyes “deserved” to be killed.

Fortunately, in a war that caused millions of deaths and widespread destruction, Britain was spared the Holocaust, the camps and the Einsatzgruppen, the Nazi paramilitary death squads that carried out mass executions. Oldfield’s book brings it all to light in great depth.