“Too Much and Never Enough. How My Family Created the World's Most Dangerous Man” by Mary L. Trump

Written by BT
Mary L. Trump has written a tell-all lengthy character assassination of her uncle, the 45th and current President of the United States of America 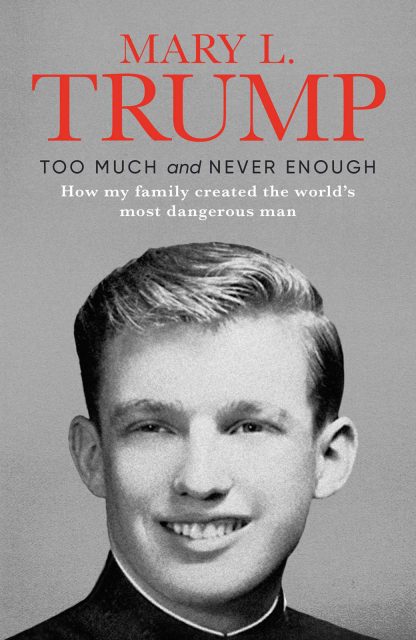 Saint Peter is in his usual position at the Pearly Gates when Donald Trump arrives. “Goddamn it,” says Trump, “I’m the fifth United States President to have been assassinated. I dedicated my life to the betterment of every single human being regardless of race or religion and no one did more for the environment. Then this Secret Service guard – a nigger, I never had anything against niggers working under me – shot me in the back seven times because he said I was a hypocrite. Me, who held the Bible outside a church in a photo op.” “Ah, yes,” replies St. Peter. “But I’ve just been reading your niece’s book… ”

“What about Charlottesville?” asks St. Peter. “You never criticised those white supremacist, neo-Nazi morons with flaming torches.” “When I said there were fine people on both sides it proved I love everyone,” defends Trump. “What about payments to good causes?” says St. Peter. “People who have led bad lives often think that if they donate some money it will cleanse their sins.” “Hell, yes,” Trump grabs at the thought. “There was that Playboy model Karen McDougal, USD 150,000, and Stormy Daniels. I gave her USD 130,000.” St. Peter: “Did I hear you mention hell?”

Mary L. Trump has written a tell-all lengthy character assassination of her uncle, the 45th and current President of the United States of America, businessman, former television personality and golfer. Going back over the dysfunctional family history that “created the world’s most dangerous man”, she says she came to the realisation “I had to take Donald down”.

A family tree diagram would have made a useful addition in her book, but basically the story goes like this: Donald John Trump was born on June 14, 1946, the second son and fourth child of the five offspring born to Fred Trump Sr. and Mary Anne MacLeod, who had married in 1936.

Mary Lea Trump, the author, was born on May 3, 1965, when Donald Trump was 18, She is the daughter of Fred Trump Jr., the second eldest of the five Trump siblings. Her father died on September 29, 1981 at the age of 42 from a heart attack arising from alcoholism; she was 16. Mary L. traces the family problems back to Fred Sr. and his wife Mary, who she says were problematic parents from the very beginning, basically unaffectionate to their children and creating an emotional void in their lives. Fred Sr. was an absent father, busy making millions as a property developer, and Mary was an often ill and neglectful mother.

Mary L. contends that Fred Trump Sr.’s many failings – ultimately, his being a “high-functioning sociopath” – weighed heavily on all the five. Fred Sr. showed a lack of empathy, a facility for lying, an indifference to right and wrong, abusive behaviour and a lack of interest in the rights of others, she writes. Love meant nothing to him.

Fred Sr. rebuffed his eldest son, Fred Trump Jr., who should have taken over the business, in particular, constantly mocking and humiliating him. Fred Sr. didn’t feel his son had the “killer” instinct to make millions of dollars. He ridiculed his son’s interests, and when Fred Jr. became a commercial pilot flying passenger planes, Fred Sr. called him a “bus driver in the sky”. It all led to his alcoholism and early death, his daughter is sure.

Donald too “suffered deprivations that would scar him for life”, the author writes. “The personality traits that resulted – display of narcissism, bullying, grandiosity – finally made my grandfather take notice but not in a way that ameliorated any of the horror that had come before”. However, Donald “felt increasingly confident that Freddy’s continuing loss of their father’s esteem would be to his benefit, so he often watched silently or joined in”.

Donald it was who became Fred Sr.’s partner in the family multi-million-dollar business, spurring an expansion from the outer New York boroughs into the real estate holy grail of Manhattan. Yet when Fred Sr. began to succumb to Alzheimer’s, Donald dismissed and derided him. Fred Sr. died in 1999.

Mary and her brother Fred III contested their grandfather’s will, feeling that it treated them more than unfairly. A settlement was made. Before Fred Sr.’s death, Donald had made a secret failed attempt to add a codicil to his father’s will that would have given Donald complete control of Fred’s estate.

Donald became President of the US and Mary watched on as he “shredded norms, endangered alliances, and trod upon the vulnerable”.

According to Trump’s Preface to her book, all that she recounts comes either from her own memory or from recorded conversations with family, friends and others. Other sources are legal, financial and family documents and email correspondence.

The book details how she was the anonymous source who revealed Trump family tax returns to The New York Times for an investigative article, the publication of which won the 2019 Pulitzer Prize for Explanatory Reporting for David Barstow, Susanne Craig and Russ Buetnerr for their exposé.

Mary writes that she was initially resistant when Craig showed up at her door in 2017 and explained that the Times was working on a big story about the Trump family’s finances, and that it believed Mary could assist. Craig persisted, sending Mary a letter about how she believed Mary had documents that could help “rewrite the history of the President”.

“As I watched our democracy disintegrating and people’s lives unraveling because of my uncle’s policies,” Mary recalls, “I kept thinking about Susanne Craig’s letter.” Mary finally called Craig, who directed her to a Long Island law firm where Mary ultimately loaded 19 boxes of financial files into a borrowed truck.

The President’s brother Robert Trump took his niece and her publisher, Simon & Schuster, to court to try to stop publication of her book. After the legal battle, an appellate judge allowed publication to proceed. The book sold almost one million copies on its first day, July 14, 2020.

Clearly, Mary L. has an axe to grind, and she rarely misses an opportunity for a negative comment about her uncle. Apart from being a Trump family member, she offers a PhD from the Derner Institute of Advanced Psychological Studies of Adelphi University in New York.

She pulls no punches in assessing Donald’s mental state. Warped by a bad father and likely beset by antisocial personality disorder and a learning disability, she avers, he learned the behaviours the world now knows so well – cheating as a way of life, not taking responsibility for failures, revering a “killer” instinct while punishing qualities such as empathy, kindness and expertise, and equating financial worth with self-worth, thus valuing humans only in monetary terms.

A number of books have been published detailing the chaos surrounding the Trump presidency but this one is likely the most devastating of all. Trump paid someone to take his high school exams, his niece alleges. He had “an aggrieved compendium of women he had expected to date but who, having refused him, were suddenly the worst, ugliest and fattest slobs he’d ever met”.

And so it goes on, plenty of it. “I have no problem calling Donald a narcissist – he meets all nine criteria,” Mary L. Trump writes. “But the label gets us only so far.” The book, with its many derogatory revelations, does the rest.