“She’s a Rainbow. The Extraordinary Life of Anita Pallenberg” by Simon Wells (published by Omnibus Press)

Written by BT
Anita Pallenberg certainly lived a life with far more thrills than most mortals – bedding down with the naughty Rolling Stones and all that – though readers of this, the first biography of her, may get the feeling that at times author Simon Wells is trying perhaps a little too hard to convince us, and possibly himself, of just how “extraordinary” her accomplishments actually were.

While Wells’ premise is accurate, that Pallenberg’s life was unconventional on the whole and remarkable in parts, his rather shaky Introduction to the book finds him tending to get a bit excessive. He opens up in deadsville Chiswick in west London, where in her elderly years Pallenberg is tending her allotment; no ordinary allotment, mind you, of carrots and cabbages like any other horticulturally minded Brit, but one where she is, naturally, growing a range of “exotic” vegetables and fruits.

Going back a bit further, in the 1980s when her untamed days with the Stones had ended and heavy drugs had taken a toll, among the best Wells can offer is that the former temptress enrolled at London’s St Martin’s School of Art to learn textile production and garment making, cutting an unusual dash, of course, in the youthful energetic corridors to “realign herself with a new generation of designers”. 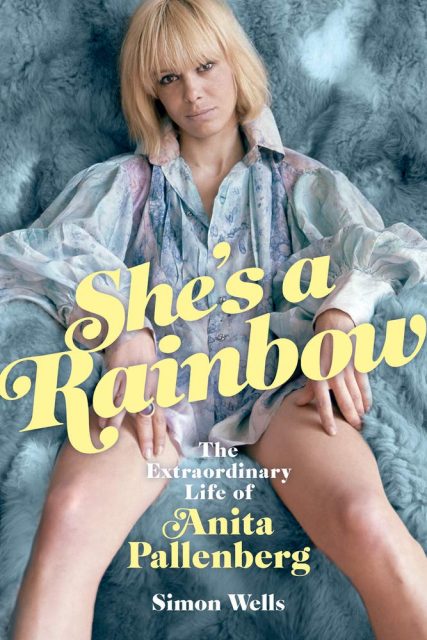 It’s a bit thin, really, though there’s no denying her glory days, which will surely be of greatest interest to most readers keen to learn more. Wells sums her up in his way: “the word ‘career’ does her scant justice… it is impossible to sum up the gamut of Anita Pallenberg’s achievements in one cute sound bite. Actress; model; designer; mother; muse; inspiration; sexual, chemical and feminist pioneer – the list of her achievements and, moreover, her influence on popular culture, is incalculable.”

And, talking about the beyond-ordinary life of a woman whom he describes as nothing less than an enigma with a rare independence of mind, Pallenberg was “an unrepentant feminist who straddled numerous eras with a brazen honesty and audacity that was utterly unique for the period”. Add her uncanny mystery and wicked cat smile, plus an awe-inspiring untutored beauty, as Wells tells it.

Born on April 6, 1942, in Rome, Wells avers that from her earliest days in the war-torn country it was obvious Anita, a “startling brand of neo-European androgyny”, would dominate every situation she occupied. “Emerging into an era still dominated by heavy post-war chauvinism, Anita tore into the 1960s with an abandon rarely witnessed in modern times.”

She “exploded onto the world’s stage” with a “confident, Zen-like aura that would elevate her above the crowd”. Readers can rack their memories and decide for themselves if this is truly Pallenberg’s due, though, as noted, it is true that mundane lives do pale beside her escapades.

Fluent in four languages, she partied with the jet set in Rome, hanging out with film diretor Federico Fellini and company during Rome’s “Dolce Vita” moment in 1959. After that, she turned up in New York as a model, hobnobbing with left-field luminaries such as artist Andy Warhol and “Beat” writers Allen Ginsberg, Gregory Corso and Lawrence Ferlinghetti.

Moving on to London, most people probably remember Pallenberg as the paramour of two Stones, Brian Jones first and then Keith Richards, and the mother of three of Richards’ children. She entered the Stones scene in 1966, moving in with Jones. They began to dress alike, as he wore her finery. She cut his hair and dyed it blonder, until they looked like twins – blonde on blonde.

Scandalous photos were taken of Jones in a Nazi uniform with Pallenberg at his feet. Richards began living with the couple but as an insecure Jones grew more abusive and jealous of Pallenberg she left him for his fellow guitarist during a fateful trip to Morocco. At the Hyde Park concert in 1969 she “cut a truly magnificent presence”, according to Wells.

She delivered a star turn in the 1970 film “Performance”, and we read the startling fact that she had an abortion to allow her to take the part. Mick Jagger plays a washed-up rock star hiding out in his mansion, living in a decadent menage a trois with Pallenberg and Michele Breton, just 17 years old, the three having much fun in the bathtub.

When a London gangster comes to hide out with them, she seduces him, dresses him up in drag and ravages his sanity. Jagger and her shared graphic sex scenes – perhaps not quite faking it for the camera. Wells looks at the evidence to work out if penetration was actually achieved. Accounts of the debauchery were “too wonderful to deny”, Jagger said. (Excuse us for mentioning it, but conquering three Stones in this department would, we believe, bring her equal with the nighttime efforts of Marianne Faithfull, her great friend.)

As the filming went on, Richards sometimes sat outside the location in his car, in a grim mood wondering what was going on inside. They remained together though, on through the Stones’ tax-exile flight to the south of France, holing up in the Villa Nellcote, where much of “Exile on Main Street” was recorded in late-night disorganised drug hazes.

When the Stones flew to Toronto in February 1977, she took 28 pieces of luggage. Customs officials found drugs in her bags, setting up the bust of Richards that almost killed the Stones. When their relationship ended after a dozen years, Richards was saying that she was a fantastic person and he would always love her, but he just couldn’t live with her.

There doesn’t seem to be evidence that Pallenberg was the direct influence for the Stones’ song “She’s a Rainbow”, the title of which Wells has borrowed. (Would she like the book’s cover photo?) The song was on their dodgy 1967 album “Their Satanic Majesties Request”. She is one of the voices chanting “hoo! hoo!” in “Sympathy for the Devil”, and she can be seen in the Jean-Luc Godard film of the recording sessions, “One Plus One”.

According to Wells, the female protagonists of punk hugely owed their sheer rebelliousness to the sort of iconoclasm Pallenberg had displayed. In 1979 a 17-year-old boy shot himself in her New York home. Finally she gave up drugs. She appeared in other films such as “Barbarella” and “Candy”, and an episode of the popular British sitcom “Absolutely Fabulous”, playing the Devil to Marianne Faithfull’s God.

Still, her time in the spotlight was really over before her death aged 75 in 2017, though Wells keeps trying hard:  “The turn of the 21st century would prove an uncertain time for former hell-raisers approaching their dotage and yet the trail Anita set throughout her glory days would continue to act as a muse for a new generation. While she would keep private company with the highest echelons of rock and fashion, her interest in horticulture and family would start to take far greater prominence.”

Rainbows – the ones in the sky – need special conditions to form, then, after shining brightly for a while they seem short-lived and fade away. Without the Stones, Anita Pallenberg probably would have made a minor name for herself. She is well served by this entertaining but rather fulsome biography, or is it a hagiography? Saint and sinner.

Simon Wells has written on film and music for numerous magazines and newspapers including the Guardian, The Times and The Independent. He is a regular contributor to Record Collector, Hotdog, TV Zone, Watch and Total Film. In addition to his writing credits, Wells has researched numerous projects for the likes of the BBC, Channel Four and Virgin, as well as broadcasting live on LBC (Leading Britain’s Conversation), ITN (Independent Television News) and BBC (British Broadcasting Corporation) on film and music.