“My Life and Rugby” by Eddie Jones (published by Pan Books)

Peaks, pitfalls in pursuit of perfection

Written by Christopher Osterberg
One year down, three years to go. One way we measure our life here at The Budapest Times is in the four-yearly Rugby World Cups. It was in September 2019 that we watched England, coached by Australia’s Eddie Jones, demolish the hot favourites, New Zealand, in the semis then crash to South Africa in the final. That World Cup was held in Japan and we saw the games on TV in a Budapest sports pub. The next cup will be in France in September 2023. You can bet Jones will be involved again somehow, and hopefully we will still be around to watch it too.

His book is subtitled “The Autobiography”, and it’s the “Rugby” half of the title that mainly attracted us to it. After all, our keen interest in the sport over the decades extended to the knowledge that Jones had coached Australia from 2001 to 2005, losing a World Cup final with them in 2003, had assisted South Africa to lift the cup in 2007 and then masterminded what is regarded as international rugby’s most stunning upset, minnows Japan’s incredible last-gasp win over giants South Africa in Brighton, England, in the 2015 World Cup.

The “Life” part of the book can be equally compelling, what little there is of it, that is, because the emphasis is almost totally tilted to “Rugby”. For example, although we were well aware of how white “White Australia” used to be, it was an eye-opener to read of the racial prejudice that Jones’ family encountered while living in a tough working-class area of Sydney.

Jones’ mother was Japanese, although she had been born and raised in California, USA. Her parents had emigrated to the US between the world wars because life was tough in Japan, but after Pearl Harbour in 1941 the family of three was incarcerated in “Relocation Centres”. President Franklin D. Roosevelt was more candid in calling them concentration camps.

Mum and daughter Nell, who was 17 at the time, were locked up in California while Dad was sent to Arkansas. The conditions were cramped and dehumanising. After the war Dad was embittered and scarred, and moved the family back to Japan. Nell, as a Japanese-American woman, now 21, was considered by the Japanese as an outsider, despite obviously looking Japanese and speaking the language. It was post-Hiroshima and Nagasaki. Thus one form of racism replaced another.

However, as an interpreter for the British Commonwealth Occupation Forces there she met an Australian, Ted Jones, who was a member of the occupation forces of the defeated country, and married him. In the US, the War Brides Act of 1945 allowed some 35,000 Japanese brides to enter with their new American husbands, but it wasn’t until 1952 that Australia allowed Japanese women to enter with their Australian husbands. 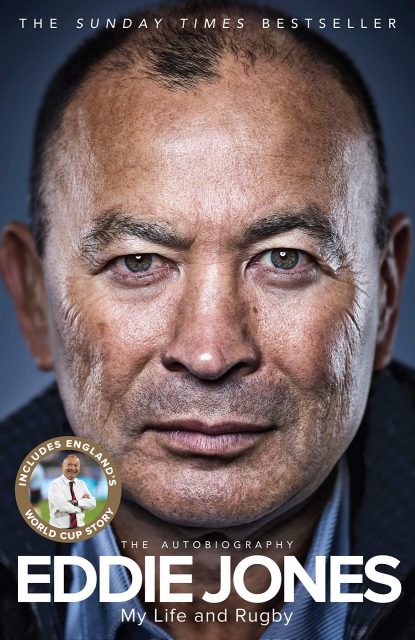 Finally, Ted and Nell could move to Australia, living in Burnie, rural Tasmania, where most people had never seen a Japanese woman before. It certainly was White Australia. Jones’ mother was followed and mocked in the streets. She kept quiet until they entered a shop, where she silenced her tormentors by ordering in perfect English with an American accent.

Eddie was born in 1960, after two sisters, Diane and Vicky. Their father was among the 60,000 young Australian men who served in the Vietnam War between 1962 and 1972 (521 were killed). While he was away, an Australian was assigned to cut the lawn and do other chores for Mrs Jones. On his first visit, seeing the door opened by a Japanese woman, he said, “I’m not mowing your bloody lawn”, grabbed his mower and stormed off.

From now on, it is Eddie Jones’ life-long career in rugby union, first as a player and then as a coach, that dominates this book. Being half-Japanese, he was lucky that sport was a pathway to acceptance amidst the racial prejudice. The family had moved to an absolutely working-class area of Sydney, and he was hooker for the Matraville High first XV. They played in the shadow of Long Bay jail, the most notorious high-security prison in the country.

There was a disproportionately high percentage of young indigenous Australians at the school, and Jones played alongside the talented Ella brothers and Lloyd Walker, who all went on to represent Australia’s national team, the Wallabies. The Matraville “no-hopers” with their shabby jerseys could shock elite schoolboy teams made up of upper-class whites.

Nine of the Matraville boys, including Jones, were picked for two New South Wales state selections that played in the annual Australian schoolboys’ championships in 1977, following which he suffered the crushing diasappointment of missing selection for an Australian schools side to tour Japan, Holland, the UK and Ireland.

He was one of only three Matraville kids in his year to enter university, and joined Randwick Rugby Club, where four of his dozen years there were coached by future Wallabies coach Bob Dwyer. These were formative years that transformed his thinking and understanding of the sport. Randwick was the leading rugby union club in Sydney and played in 16 consecutive grand finals between 1977 and 1992, winning 12 of them.

Jones received another major disappointment when Dwyer overlooked him for the Wallabies in 1989. He never had a second chance. Later, as an esteemed state and international coach, Jones incorporated the “Randwick way”, the club’s mantra of playing attractive running rugby, passing and holding on to the ball rather than kicking away possession.

In 1994 Jones gave up his career as a teacher and school principal to coach Randwick. He next coached the ACT Brumbies, who in 2001 became the first team from outside New Zealand to win the Super 12 tournament. He also took Australia A to a win over the touring British and Irish Lions, this success leading to his appointment as head coach of the Wallabies.

He inherited a team that had peaked in winning the 1999 World Cup. Australia won the 2001 Tri Nations but then entered their home World Cup in 2003 as third favourites behind New Zealand and England. They managed to upset the All Blacks in the semi-final before a painful loss to England in the final in extra time through a last-minute drop goal by Jonny Wilkinson.

Relieved of his position at the Wallabies, Jones endured a torrid season with the Queensland Reds in 2007, who finished bottom of the Super 14 table. He was technical advisor for the South African team that won the 2007 World Cup, and in 2012 was appointed head coach of Japan to lead them to the 2015 Rugby World Cup, notching the heart-stopping upset over South Africa.

Jones was named as the new England head coach in November 2015, taking over a demoralised team but leading them to their first Grand Slam since 2003. England played a record-equalling unbeaten run of 18 games and he guided the country in 2019 to their first World Cup final since 2007. They savaged reigning world champions New Zealand 19-7 in the semi-finals but were overpowered by South Africa in the final a week later.

Rugby union is a brutal game between men who often look like they have been hewn out of tree trunks, and the margins at the top can be narrow. Jones earned a reputation as a hard taskmaster (take a look at the cover of the book and see if you would like to argue much  with this man) who challenged his players to squeeze out every last bit of their potential. His hard methods did not suit everybody but he says they were delivered with the best intentions.

Jones takes an uncompromising approach with great discipline and attention to detail, setting out to make his teams tough, tactically smart and driven by a great belief in themselves. He is always looking for an edge, with deep thinking, determination and emotional courage at the heart of every endeavour.

In Jones’ sporting world, any achievement of note takes a lot of work and application. You have to be prepared to face defeat and come back from it. Mistakes will be made and games lost but if you remain brave and determined you will prevail.

The World Cup was launched in 1987, rugby went professional in 1995 and the more carefree days were past. Not so long before, teams simply sucked on a slice of orange on the field at half-time, try scorers merely got a pat on the back, a bit of biff was tolerated and beer was consumed in liberal quantities. Now high jinks are frowned upon in the relentless quest to win, win, win. The fun has gone out of it somewhat but we still feel compelled to watch.