One of life’s great mysteries

Written by Christopher Osterberg
Here at The Budapest Times we like to consider ourselves as moderately well-read (albeit with plenty of glaring gaps in our literary adventures), and there came a time many years ago when we decided it was high time we should sample Agatha Christie, the “Queen/First Lady of Crime”. After all, she had sold an estimated two billion-plus books, bettered only by the Bible and Shakespeare, so all those readers couldn’t be wrong, could they?

It must have been a good three decades ago and we forget now which it was of her 66 detective novels that we tried, but it left us mystified. Not as to the murderer, of course, as Mrs Christie duly exposed the dastardly culprit. It was the book itself, which we found undeniably ordinary. A year or so later, we figured we had to give her another try. Strangely, it was no better. Persistent devils that we are, we chanced a third one another year or so later. Pshaw. Three strikes and out. After that we gave up.

All the more interest now, then, to read H.R.F. Keating’s collection of 12 writers’ essays about Christie, to see where we might have gone wrong. His book, first published in 1977, the year after Christie’s death, has been reissued with the addition of an introduction by Sophie Hannah, who is described by the publisher as the “bestselling author of ’The Monogram Murders’.” Google offers the further information that “The Monogram Murders” was published in 2014 and is based on characters created by Christie, whose estate authorised Hannah to write further adventures of Agatha’s much-loved fictional Belgian detective Hercule Poirot.

One of the 13 chapters in Keating’s collection is in fact a transcript of a conversation between him and Edmund Crispin. Thanks to the useful potted biographies of all the contributors at the rear of the book, we discover that Crispin reviewed mystery novels in the London Sunday Times from 1968, and between 1944 and 1953 he wrote nine Gervase Fen detective stories (sorry, another glaring gap).

And this is an apt moment to remind that Henry Reymond Fitzwalter “Harry” Keating, born 1926, died 2011, was, like Mrs Christie, an English crime novelist himself, his tales featuring Inspector Ghote of Bombay CID. “Harry” was also a reviewer of crime fiction, filling this role for The Times newspaper for 15 years. 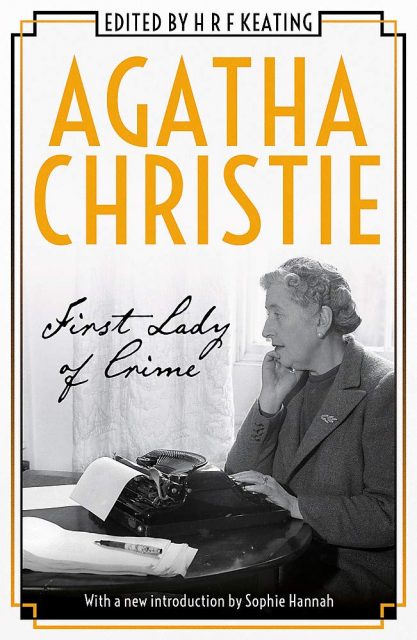 During the Keating-Crispin conflab, titled “The Mistress of Simplicity” in reference to the Christie style, Keating says she is generally regarded as a superb plotter but he asks Crispin if her actual writing was on the same level. Crispin replies no, saying, “She wrote dialogue very well – a lot of her books are dialogue almost entirely, with relatively little action – but I wouldn’t say she was a particularly good stylist”.

This exchange stirs our murky memory and reminds us of one of the things that we disliked about Christie all those decades ago – there was oodles of talk and very little descriptive writing.

This helped her books translate well, he says, and they have appeared in almost every spoken language. Her artistic success varied from book to book but she had cunning plot construction and offered her readers escapism. (UNESCO, by the way, lists Christie as the most translated author in history.)

Another essayist, Julian Symons, offers a comment pertinent to our own unfortunate experience with Christie. Raymond Chandler, Symons recalls, once said that plotting was a bore, a necessary piece of journeywork to be done, and the actual writing was the thing that gave the author pleasure. Christie felt almost the opposite, which was one reason why she didn’t care for Chandler’s work. Err, well, excuse us, but we happen to love Chandler, and we reread him…

Symons, a crime reviewer for the London Sunday Times and who succeeded Christie as President of the Detection Club, pays due honour to her skill with plots –  her supremacy and originality in constructing puzzles –  and the astonishing variety of her work, but says it has to be acknowledged that the level of her work varied greatly.

Most of her finest performances belong to the 1920s and 1930s, he says, with the following decade more or less maintaining this high level, but after that the decline was steady and near the end it was steep.

The opening essay in Keating’s collection is “The Case of the Escalating Sales” by Elizabeth Walter. She is a published author of stories of the supernatural, an editor at Collins Publishers from 1961 and editor of their Crime Club imprint from 1971 to 1993, under which Collins published crime fiction. The Christie-Collins, author-publisher relationship endured for 50 years and more than 70 books.

As her title “The Case of the Escalating Sales” says, Ms Walter sticks mainly to a factual account of how Christie graduated from tyro writer to headline news, with the observation that Christie was one of the most professional of authors, reckoning to complete a book in six weeks, meeting her deadlines, keeping an eye on dust jackets and blurbs, correcting her proofs promptly and, despite her huge success, displaying remarkable modesty.

In crime author Michael Gilbert’s contribution, “A Very English Lady”, we again get a mainly biographical recounting, Here is her mysterious real-life disappearance in December 1926 that gripped all Britain, plus perhaps lesser known episodes such as her archaeological ventures in the Middle East. Gilbert reminds how her play “The Mousetrap”, which ran continuously in London’s West End from 1952 until March 2020 when it was halted by COVID-19, had its origin in 1947 following a request by Queen Mary, a Christie fan, that she write a radio play.

“The Christie Everybody Knew” chapter by suspense writer Celia Fremlin, takes a look at the reviews Christie received over the years, and “The Christie Nobody Knew” by Dorothy B. Hughes, another suspense novelist and a critic, writes about the six novels Christie wrote under the pseudonym Mary Westacott between 1930 and 1956. These are, Hughes says, distinctly different from the mystery books, being on the whole a fictionalised autobiography.

Theatre historian and drama critic J.C. Trewin examines her “Midas gift” to the theatre – more than simply the record-breaking “The Mousetrap” – and film critic Philip Jenkinson focuses on a dozen or so movie adaptations, the most remarkable being the 1945 “And Then There Were None”, director Billy Wilder’s “Witness for the Prosecution” in 1957 with its quadruple twist of an ending, and the enormously successful “Murder on the Orient Express” of 1974.

Mystery novelist Emma Lathen takes a humorous look at the impact of Christie in the United States, and Keating’s collection winds up with portraits of Poirot and “his very antithesis” Miss Marple, as detective novelist Christianna Brand opines: “Where Poirot is all shine and show-off, Miss Marple is the very pink of self-deprecation.”

In 1971, Christie was appointed a Dame Commander of the Order of the British Empire (DBE) for her contributions to literature. She died in 1976 aged 85.

Will we read a fourth Christie? Perhaps “The Murder of Roger Ackroyd” (“long accepted as one of the finest of her detective stories”: Michael Gilbert; “the best and most powerful of her books”: Celia Fremlin) or “And Then There Were None” or “Sparkling Cyanide” (both “fantastically ingenious”: Gilbert) or “The Mysterious Affair at Styles” (“Christie stands in a class by herself as a writer of detective stories”: anonymous reviewer) or other commendations?

Probably not. H.R.F. Keating’s collection of essays does nicely for the moment.