“Stranger Than Kindness” by Nick Cave (published by Canongate)

Magic, mostly, in this Aladdin’s Cave

Written by Christopher Osterberg
We have the Royal Danish Library to thank for this handsome book displaying a splendid collection of Nick Cave kitsch and ephemera, handwritten lyrics and original artwork, archival photographs and personal possessions.

It was the library that had the idea to set up “Stranger Than Kindness: The Nick Cave Exhibition” to show Cave’s development as a globally recognised artist, from his childhood in 1960s rural Victoria, Australia, through his first tentative bands, his relocations to Britain, Germany and Brazil, arriving at the Bad Seeds and finally the cultural everyman he has become.

The way Cave has told it, he was reluctant to become involved with an exhibition at first, saying he is not nostalgic by nature and has no time for trips down Memory Lane. Here at The Budapest Times, though, we suspect it didn’t take a great deal to persuade a man whose regard for his own importance has grown lately in inverse proportion to a decline in his music.

The exhibition, which opened this June, can be seen if you can get over to Copenhagen before next 13 February. Meanwhile the book has been published in association with the exhibition and is a far easier option in the middle of the worst global health disaster since 1918. There’s no denying it is a terrific book, no matter our reservations about Cave’s latter-day pomposity, wholeheartedly adopting the mantle of Important Artist. 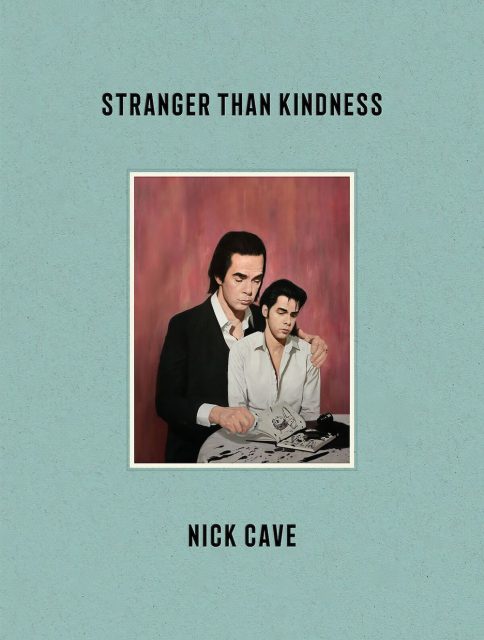 He was born in Warracknabeal, rural Victoria, on September 22, 1957, and fans, including us up to a point, will be delighted to see the great photos of him as a toddler in his cowboy suit, circa 1960, of him singing in the 22-strong boys’ choir of Holy Trinity Cathedral, Wangaratta, 1965, of the budding rebel at a Saints concert in the Tiger Room, Melbourne, in 1977, and with his disaffected schoolpals-in-crime at Caulfield Technical College, Melbourne, the same year.

The earliest photo of Cave himself performing comes from Korowa Anglican Girls’ School, Melbourne, circa 1975, his unnamed band playing mainly covers, influenced by David Bowie and The Sensational Alex Harvey Band, and with frontman Cave in glam costume and make-up, hogging the mic. This burgeoning interest in rock music no doubt helps explain the letter from the headmaster of Caulfield Grammar School to his father to complain about “Nicholas’ attitude and conduct in the School”.

Two beautiful photographic portraits of his parents are shown, first, a suave Colin Cave, circa 1956, who died in a car accident in 1979. A note with the photo says “Cave was 21 when his father died”, but in Darcey Steinke’s long essay in the book Cave recalls: “I see that my artistic life has centred around an attempt to articulate the nature of an almost palpable sense of loss that has laid claim to my life. A great gaping hole was blasted out of my world by the unexpected death of my father when I was nineteen.” Steinke says Cave learned to fill that hole by writing. Cave’s birthdate would indicate he was probably 21 at the time, not 19.

Also reproduced: the cover of an edition of Vladimir Nabokov’s “Lolita”, the controversial novel of sexual obsession with pre-pubescent girls and the subject of an oft-told tale of how Colin Cave read some of it to young Nicholas at the age of nine or 10, an occasion now regarded by the son as a seminal moment between him and the father he would lose.

Second of the parents, we see a snapshot of a vivacious Dawn Cave, scarf knotted round her head in 1958, and sadly presented on public view through the pages of this book coincidentally published at almost the same time as her death this September 15, 2020, aged 93 years.

On we proceed with memorabilia from Cave’s early bands, the juvenile Boys Next Door and The Birthday Party, with one of the latter’s records, “Mutiny”, the subject of a 1987 sketch by Cave in his blood. An excellent painting of Cave by girlfriend Anita Lane titled “Horn of Plenty” in 1977 is accompanied by her later comment that if “Nick was hit by a bus he would be compelled to write about it in his own blood before he died”.

Surprisingly, a reproduction of a love letter from him to her in 1980 is accompanied by her reported comment to a reporter: “I wish I never met the guy.” This sounds apocryphal, or just a joke, considering Cave’s repeated touting of her as a “muse” and the fact that she wrote the lyric for his recording “Stranger Than Kindness”, described by Cave as the favourite of all his songs, not to mention being the title of the book.

Cave’s grubby “The Penguin Dictionary of Curious and Interesting Words”, shown here, no doubt supplied much of the curious vocabulary for his novel “And the Ass Saw the Angel”, a manuscript of which is also seen.

As long-time Cave connoisseurs we at The Budapest Times should explain. The Birthday Party may have been influential and confrontational but they were often unlistenable on record. Then between 1984 and 2001 he and the Bad Seeds released an Indispensable and brilliant series of 11 albums, from “From Her to Eternity” to “No More Shall We Part”. Only the Beatles can equal such a solid body of work in rock music, not Dylan, Cohen, the Stones or anyone else.

What’s more, Cave gave us these songs in take them or leave them fashion, slowly building an audience absolutely on his terms. Unfortunately, as appreciation and adulation built, not to mention his ageing, a mellowing of the music followed with lyrics more about birds and flowers than throat-slitters, and the emphasis switched from guitar to piano.

Blixa Bargeld bailed out in 2003, Mick Harvey in 2009. Reverential videos, choirs and orchestras followed, the returns diminishing as Cave began to believe his own growing legend, diving into soundtracks, books, collaborations and occasional lectures, with his concerts degenerating into singalonganick crowd-pleasers. Awards – he once told MTV “my muse is not a horse” – became accepted, as did the media – “scum” in one song.

Note the change visible in the “Stranger Than Kindness” book from those early uncared-for notebooks that a strung-out Cave dragged around the world in his trashbag suitcase to the bespoke and neater notebooks of latter years. Inevitably, perhaps, we note a certain amount of self-aggrandisement, such as the double-page photo of him writing “The Death of Bunny Monroe” on holiday at Villa Lina, Italy, in 2008; the Great Artist on display.

“Stranger Than Kindness” features a long essay titled “God Is In The House” by Darcey Steinke, an American author of five novels, which draws together the various strands that helped unleash the immense power of Cave’s early lyrics: the Bible, Elvis Presley, John Lee Hooker, Johnny Cash and so on. Unquestionably a skilled writer, Cave is also prone to word-drunk babblings: “Christ, it seemed to me, was the victim of humanistic lack of imagination, was hammered to the cross with the nails of creative vapidity”, for example.

It’s a great book for devotees, both for unquestioning ones and those sick to the teeth of hearing him go on and on about his “creative process”. As for the cover painting, “Ink and Solace”, by Ben Smith, please send explanations/interpretations to us.