Long wait for the stardust to arrive

Written by Christopher Osterberg
On March 19, 1970 yours truly was a 19-year-old junior reporter in the Bromley and Kentish Times newspaper office in south-east London. One day I answered a ringing phone and a woman said: “I think you should know that David Bowie is getting married today at 11 o’clock at Bromley Register Office.”

Bowie lived in the neighbouring suburb of Beckenham and was a minor local celebrity, having scored a hit single with “Space Oddity” in 1969, inspired by Stanley Kubrick’s 1968 film “2001: A Space Odyssey” and the first Moon landing on July 20, 1969. “Thanks. Who’s calling?” I asked the woman. “Well, it’s David’s mother,” she replied. “But don’t tell him I told you. He doesn’t want his fans to know.”

This was a little amusing because one-hit-wonder Bowie basically wasn’t overwhelmed with fans at the time. As the Swinging Sixties had exploded all around him, he went through a succession of unsuccessful groups – The Konrads, Manish Boys, The King Bees, The Buzz, The Lower Third, The Riot Squad – and his new single, “The Prettiest Star”, and new album, “The World of David Bowie”, were both flopping on release in March 1970.

It was to be a whole year of struggle. He was uncertain of his artistic direction, was trying to put together a regular band and wanted to dump his manager, Ken Pitt. Bowie was open to influence, dabbling in mime, and he was thinking of ending his participation in the Beckenham Arts Lab, held each Sunday at the Three Tuns Pub, near his home. But to do what?

Bowie, born David Robert Jones, had changed his surname to Bowie in the mid-1960s. Following the secretive phone call from Mrs Jones, a Kentish Times photographer was summoned and we proceeded to the register office. I alerted the Ferrari Press Agency in Sidcup, Kent, which serviced the Fleet Street national newspapers. If Ferrari’s owner, Geoff Garvey, could sell the story, I would get a cut. Garvey thought the wedding had potential, and he sent his own reporter and photographer.

So when Bowie, his bride-to-be Mary Angela Barnett, Bowie’s Mum Margaret “Peggy” Jones and a handful of friends turned up, there were the four media men waiting, notebooks and cameras poised. Bowie was taken aback but polite, and he introduced Angie, an American, describing her as a model. The couple were vividly dressed, Bowie with rat-tail hair and an Afghan coat. Mum was dressed like the Queen would dress, in matching jacket and skirt and hat, and she stood between the couple when they obliged the press photographers. 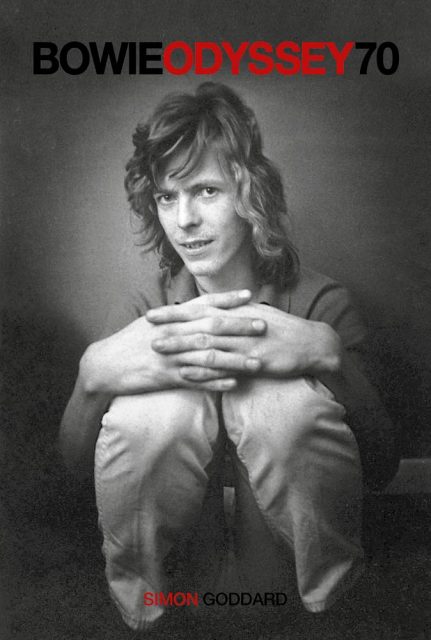 After a few minutes’ chat with the press, Bowie took his party inside, understandably leaving the journalists on the pavement outside. When the newlyweds emerged 20 minutes or so later, the press quartet was still hanging around. Bowie’s lot adjourned across the road for celebratory drinks in the Swan and Mitre pub, but when the reporters followed, Bowie’s face showed that he had clearly had enough of the uninvited quartet.

We took the hint and disappeared. Garvey sold the story with photo to one of the two London afternoon papers that day, and the Bromley and Kentish Times, a weekly containing strictly local news, had it on the front page. Nobody in the Bowie bunch seemed to have bothered to bring a camera, so otherwise the event would have gone unrecorded.

This little adventure was recalled while reading Simon Goddard’s new book, which is about Bowie’s life all through 1970, including the wedding. Goddard was born in Cardiff, Wales, in 1971, the year after the wedding, and in his acknowledgements at the back of the book we discover that two of the people he spoke to in writing it were Angie and one of the wedding’s scant attendees, Bowie Best Man and drummer John Cambridge.

One of these two presumably provides the detail recounted by Goddard, who writes that the wedding rings were actually rings for the wrists… “Four silver bangles from Peru, a gift from Angie’s older brother. Shared two apiece, they slip on easily and will slip off just as quickly, but they are ringly enough for legal purposes, even if Peggy cannot help twitch her tight lips with shrewish unease as they gaily jingle at the moment of matrimony”.

According to Goddard’s confidante, “Best man and nominated witness John stands close, preparing to take the pen next [to sign the register]. Before he can, another hand thrusts in and seizes it. Peggy’s grip is firm. David can do nothing to stop her leaning forward to sign the book in John’s place… And the deed is done. By common law, David and Angie are now Mr & Mrs Jones.

Herein is the florid and rather flippant style employed by Goddard throughout his 150 pages. The Bromley Times version was a bit more matter-of-fact, and to this mind Goddard is over-familiar and over-blown, a sort of narrative non-fiction, too purple prosey. He seems to serve himself more than he does the subject or the reader. It may well be that the latter are likely to find they either like it or they don’t.

As for the descriptive colour he provides, we presume the accuracy of the revelation that Bowie’s Mum, the cuckoo in the wedding nest, did indeed twitch her tight lips with shrewish unease. We have literal, more prosaic minds at The Budapest Times and aren’t keen on biographic extrapolation or over-imaginative detail.

In fact, 1970 wasn’t a particularly decisive year for Bowie on the path to his megastar breakout in mid-1972 with the “The Rise and Fall of Ziggy Stardust and the Spiders from Mars” album. Apparently “BOWIEODYSSEY70” is the first book in what will be a 10-year biographical series, with one volume for each year of the 1970s. Our “BOWIE ODYSSEY70” book is a paperback but also comes as a limited-edition collector’s hardback of 250 copies containing an art print. The “1971” entry will be with us in 2021. Ten matching books will make a nice-looking set on bookshelves but expect some years to be more exciting than others, with things definitely quieting down a bit for Bowie in the last couple of years of the decade.

Still, with Simon Goddard in full vivid flow, he’ll hopefully carry readers along with his extravagant web of words. As in this first book, he is able to pep things up a bit with excursions into such subjects as “queer bashing”. This is introduced to give some social context, though fortunately it does not appear to have been a practice to which the sexually liberal Bowie fell victim. Ditto the odd passage on the defusing of an unexploded World War Two bomb.

Other times, Goddard adopts the annoying habit of delivering up half a page or so of over-ripe fancy stuff before we discover what it is that he is actually writing about. Or not discover what he is actually writing about. Should you be confused, for instance, about the excursion into the life of “Albert and his son Harold” of Oil Drum Lane, Shepherds Bush, this is a reference to the contemporary TV series “Steptoe and Son”, though you’d have to be of a certain age to realise.

Although a great Bowie fan I’m not sure I will be willing to complete this odyssey, even if I live that long. A lot of Bowie fans may have dropped by the wayside by 2029 too.