Sisi and her Greek Odyssey

Written by János Mátray
One year after Austrian author and journalist Stefan Haderer wrote his first book on Empress Elisabeth and her special relationship with Greece, the English translation is finally out. Under the Spell of a Myth, independently published with Amazon KDP, provides a fresh perspective on Sisi’s travels, her young companions and teachers, and her fascination for Greece, its culture and history. As recent series and movies have reignited “Sisi hype”, Haderer’s non-fiction publication comes at just the right time.

The public is well aware of Elisabeth, the Empress of Austria and Queen of Hungary, a both legendary and tragic character in history. Thanks to films starring Romy Schneider, several plays and a musical translated to Hungarian, Dutch, Swedish and Japanese, Sisi has become popular around the world. New series like “The Empress”, a Netflix production, continue to play with clichés, which mostly have little in common with her real biography.

Stefan Haderer wanted to do things differently. Inspired by the intimate and banned diaries of Elisabeth’s Greek teacher Constantin Christomanos, he travelled to Greece and researched the special relationship and affection the reclusive and melancholic monarch had for the country. The author has done extensive research in various places and also combed a number of different archives for details of Sisi’s life and her (altogether 15) visits to the Mediterranean country which she considered to be the “land of her dreams”.

The result is a compelling and interesting book of 247 pages, with some of the queen’s original poems at the end of the eight chapters, a lot of rare images and – a true novelty – the detailed biographies of Sisi’s ten Greek readers. Under the Spell of a Myth thus “offers a rewarding new twist on the theme,” Andrew Behrendt, history professor at Missouri University, writes in a review. In his “laser-focused” narrative, Haderer fluently and vividly describes Elisabeth’s visits to Greece, beginning with the sick young woman’s first landing on Corfu in 1861 and ending with the aging and depressed queen’s last stay at her Achilleion, the fairytale palace she had built on the island, in 1896. The story, of course, ends with Elisabeth’s tragic assassination at Lake Geneva and her confidants’ and family’s reactions.

The author has characterised his book as “a mix between biography, travelogue and poetry album.” He draws on the lively conversations between Elisabeth, her ladies and readers, the witty correspondences with her remote husband Franz Joseph, and Sisi’s melancholic poems, in which she often raves about her adored ancient hero Achilles.

Almost as adventurous as Elisabeth’s life are the impressive biographies of her companions. By researching their diaries and many historical reports, Haderer has shown that the young gentlemen were quite prominent figures in their own right: Roussos Roussopoulos, for example, became a professor at the Budapest Oriental Trading Academy and an Honorary Consul at the Greek embassy in Budapest. Marinos Marinaky and Alexander Mercatis, on the other hand, were gifted athletes and members on the Committee of the Olympic Games in Athens. Perhaps the best known of Sisi’s readers was Greek stage director and playwright Constantin Christomanos. Rare excerpts from his diaries are a bonus in Haderer’s book. Another teacher was the poet Constantin Manos: He fought for Greek national independence from the Ottoman Empire and died in a plane crash.

Im Schatten Homers, the German original, has received very positive reviews and is being sold in the museum shops of various Sisi palaces across Europe, including Gödöllö. It has been described as “engaging and well sourced, painted with the fine brush of an author committed to getting all the details of the composition just right.” With the English edition, Stefan Haderer now expects to reach an even wider audience. 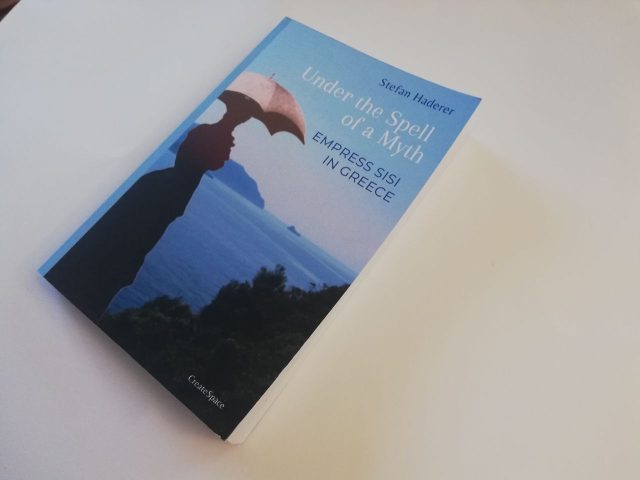 Under the Spell of a Myth