“Me” by Elton John (published by Macmillan)

Have you heard the one about Princess Diana?

Written by Christopher Osterberg
“The great thing about rock and roll is that someone like me can be a star,” says Elton John, meaning that he was just an ordinary bloke from a dull London suburb. What he says is partly true – you don’t have to sing like Frank Sinatra or play piano like Chopin to be in a rock band – but on the other hand not every Tom, Dick or Harry has the guts to appear on stage dressed as a woman, a cat, Minnie Mouse, Donald Duck, a Ruritanian general, a musketeer, a pantomime dame or other ridiculous costumes. Very occasionally he performed as a normal human being.

If anyone isn’t a normal human being, it is Elton John. As Donald Duck, for instance, he found he couldn’t sit on the piano stool properly, adding to a series of uncomfortable gigs that have been disrupted by bomb scares, anti-Vietnam War protests, hot dogs thrown by Parisiennes and a hurled hash pipe that knocked him out.

He once ran on stage in a gorilla costume during a Stooges show, to startle singer Iggy Pop, but got thrown into the audience by one of the no-nonsense band. After contracting prostate cancer, in Las Vegas he peed himself into an adult nappy beneath his suit, fortunately unbeknown to the audience.

Elton – there is only one Elton. Like Elvis, the vast majority of people only need hear the one name to know who is being talked about. And, for we rock fans, like Elvis it isn’t absolutely necessary to be a great admirer of their music in order to want to read about a man’s amazing life. And it doesn’t come much wierder or over the top than Elton’s.

One of the most flamboyant entertainers ever, for five decades now, Elton has known everyone there is to know and he has a bucketful of terrific anecdotes to prove it, from royalty to fellow rockers.

Wisely, we think, he doesn’t fall into the biographical trap of tracing his family tree back to William the Conquerer. He basically kicks off with his parents, who just didn’t get on together. Elton was born Reg Dwight in 1947 in Pinner, north-west London. It was an uncomfortable childhood. Dad never had a kind word for him, only constant criticism, and they eventually drifted apart. Mum was spiteful to him all his life and he could never really work out why.

“They were both stubborn and short-tempered,  two delightful characteristics that it’s been my huge good fortune to inherit,” Elton says with the typical candour that permeates the book. What’s the point of writing one, he asks, unless you’re going to let it all hang out? And Elton doesn’t hold back about the huge fame, gay sex and heavy drug and alcohol use. After a few vodka martinis he could be capable of anything from verbal abuse to violence to public nudity.

Auntie Win had a piano and Reg was playing it at a very young age, around the time he started at his first school. “I was just born with a good ear, the way some people are born with a photographic memory. If I heard something once, I could go to the piano and, more or less, play it perfectly.” 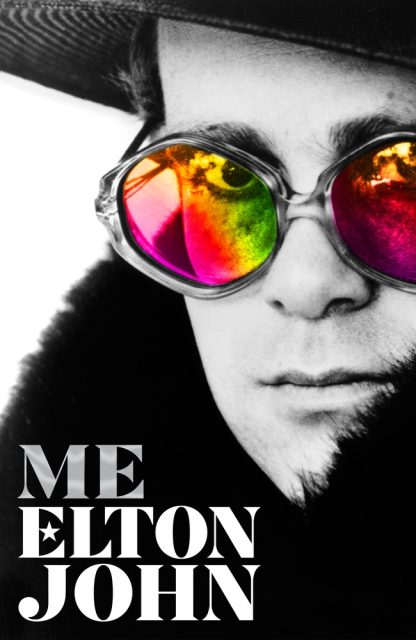 At grammar school, the way people were dressing was changing but Elton’s father expressly forbade him from wearing anything that looked like it had some connection to rock and roll. “[Fellow pupil] Keith Francis was cutting a dash in a pair of winkle-picker shoes that had pointed toes so long the ends of them seemed to arrive in class several minutes before he did. I was still dressed like a miniature version of my father.”

When he started playing in bands he wanted to be a frontman but was trapped behind a piano. “I couldn’t strut around like Mick Jagger, or smash my instrument up like Jimi Hendrix or Pete Townshend: bitter subsequent experience had taught me that if you get carried away and try and smash up a piano by pushing it offstage, you end up looking less like a lawless rock god and more like a furniture removal man having a bad day.”

Elton, known to Rod Stewart as Sharon, and Stewart, known to Elton as Phyliss, have spent nearly 50 years in friendly rivalry. “It reached a kind of peak in the early eighties, when Rod was playing Earls Court. They had advertised the gig by flying a blimp over the venue with his face on it. I was staying in London that weekend and I could see it from my hotel room window.  It was too good an opportunity to miss.  So I called my management and they hired someone to shoot it down: apparently it landed on top of a double-decker bus and was last seen heading towards Putney.”

Another time Elton, out of his head on some mind-altering substance, called his management because it was too windy outside his window and he wanted them to do something about it. This time the reply was curt.

A hilarious visit to see Beach Boy Brian Wilson at his home in Bel Air, a man acknowledged by Elton as one of pop history’s true geniuses but at that time known as a reclusive weirdo, looked to be going fine at first until Wilson kept singing the chorus of Elton’s “Your Song” to him and Elton’s lyricist, Bernie Taupin – over and over and over again.

Princess Margaret invited Elton and his band to Kensington Palace for supper after a gig at the Royal Festival Hall. Everyone knew her marriage was in trouble, and her husband, Lord Snowden, stormed in halfway through the meal and literally snarled “Where’s my fucking dinner?” at her. They had a huge row and she fled the room in tears.

Elton met Elvis backstage in Maryland,  a disconcerting encounter with a man clearly in trouble. He died the following year. Similarly, when Michael Jackson came to lunch he looked awful, really frail and ill. His makeup looked like it had been applied by a maniac and what was left of his nose was covered with a sticking plaster.

Princess Diana was a dear friend for years, “fabulous company, the best dinner party guest, incredibly indiscreet, a real gossip”. Everyone else loved her too: at a dinner party John threw at his home for Hollywood types, with Princess Di as a special guest, Sylvester Stallone and Richard Gere nearly got in a fistfight over her. According to John, when Gere and Diana sat down together in front of the fire after dinner, Stallone “stormed off home”.

Elton and her unexpectedly fell out after she withdrew her foreword at the last moment to a book for the AIDS Foundation. They reconciled after the murder of fashion designer Gianni Versace in 1997 and of course Elton sang a reworked version of his “Candle in the Wind” at Dianna’s funeral just weeks later in Westminster Abbey.

Encounters with Queen Elizabeth, John Lennon, Andy Warhol, Bob Dylan, Freddie Mercury , Billie Jean King, Katharine Hepburn and many others are recounted. A great Preface centred on the eccentric Long John Baldry should entice anyone into the book. And there is Elton’s famously compulsive spending, including a Melbourne tram and an offer to buy a full-scale model of a Tyrranosaurus Rex from Ringo Starr’s garden. On his shopping binges, he collected in bulk pricey items such as Tiffany table lamps, antiques and fine art, as well as gaudy kitsch. At one point he began storing the overflow on his squash court.

Things tail off a bit towards the end of the book, as they do with most ageing rock stars, when he cleans up his life, gets a knighthood, undertakes a same-sex marriage and adopts two boys. Now he does regular dad things, like taking the kids to school and out for pizza — “things I would once never have thought of doing.” But “most of all, I want to spend time being … well, normal, or as normal as I can hope to be”.

“Me” is a hugely enjoyable dive into the largely abnormal world of celebrity and rock, even if you aren’t really a fan of his music.