“Colditz. Prisoners of the Castle” by Ben Macintyre (published by Viking)

Fresh understanding of an oft-told tale

Written by BT/MTI
Books about Colditz run into the dozens, and others about escapes from German prisoner of war camps would be in triple figures, so author Macintyre is necessarily offering something new, what’s described as access to an unprecedented range of material that adds up to the “real” Colditz for the first time. It’s a big claim and hopefully justified.

Colditz is one of those names that lives on 77 years after World War Two ended, its infamy resting on the quirky aspect of being the “unescapable” prison where the most incorrigible men were sent, mostly officers and hell-bent on busting out. The myth persists, Macintyre writes, of men with moustaches firmly set on stiff upper lips, defying the Nazis by tunneling out of a grim and forbidding Gothic castle set on a German hilltop.

The stories of the would-be escapers who dug tunnels, hacked through iron bars, descended precipitous drops on knotted bedsheets and disguised themselves as German soldiers or women have been oft told. But this legend, unchanged and unchallenged over the decades, is only part of the truth, the author tells. He offers new insight into what was a miniature replica of pre-war society, only several shades weirder.

Here, his narrative goes, was a close-knit community intensely divided over issues of class, politics, sexuality and race. Participants in the drama included communists, scientists, homosexuals, women, aesthetes and philistines, aristocrats, spies, workers, poets and traitors. Many of these, writes Macintyre, have previously been excluded from the standard saga because they did not fit the traditional mould of the white, male Allied officer, dedicated to escaping. What’s more, about half the population of Colditz was German, guards and their officers, and these too contained a rich cast of characters rather than the uniform group portrayed in the typical tale. Here were some men of humanity and culture far removed from the brutal Nazi stereotype. In fact, somehow many were not even National Socialists at all.

No Colditz prisoners remain alive, and apart from all the books, most classified material has now been released into Britain’s National Archives. Macintyre says the best general account is “Colditz: The Definitive History” (2001) by Henry Chancellor that emerged in its turn from a British television series, “Escape from Colditz” (2000).

Seventy-six people were spoken to for the series over 12 years, and Macintyre went to the interview tapes in London’s Imperial War Museum. Also, he had access to the written recollections and a scrapbook compiled by the supreme security chief at Colditz, Lieutenant Reinhold Eggers, a schoolmasterly type but also a man of principle who disliked violence against inmates. Eggers’ memories offered an important understanding from the German perspective.

Colditz was a frighteningly grim, high-security cage holding the most troublesome captives of the Third Reich, the deutschfeindlich, or “German-unfriendly”. These were mostly British, French, Polish and Dutch They faced a sheer precipice on three sides, to the River Mulde some 75 metres below. Terraces were festooned in barbed wire. Plus, a dry moat, oaken doors and heavy iron bars. At night the walls were ablaze with searchlights. The nearest city, Leipzig, was nearly 40 kilometres away, the nearest border not under Nazi control almost 650 kilometres. 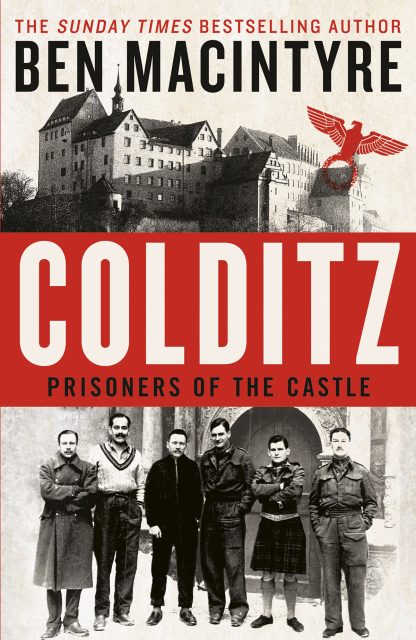 However, while Colditz Castle was as solid and unyielding as the rock on which it had stood since about 1043, it had been built and rebuilt in layers and was riddled with hidden compartments, abandoned attics, doors secured by medieval locks and long-forgotten fissures. The captured officers sent to this mighty fortress would seek to exploit these openings, while their captors, just as energetically, attempted to plug them. The various nationalities had overlapping escape attempts and competing tunnels until greater coordination was forged.

Just one example: Michael Sinclair, 25, a British lieutenant, thought only of escaping and he impersonated Stabsfeldwebel (Sergeant Major) Gustav Rothenberger by copying his spectacular facial plumage (the inmates nicknamed him Franz Josef) with the aid of bristles from shaving brushes, a “German” uniform made from dyed prison blankets, an Iron Cross of zinc stripped off the castle roof and a cardboard holster holding a piece of wood made to look like a gun.

The two “German soldiers” with him in greatcoats carried dummy rifles with wooden barrels polished with pencil lead, bolts fashioned from bits of steel bedstead and tin triggers from metal cutlery. Thirty-five more British officers waited in the darkness to see if the trio could succeed in dismissing the sentries, thus giving four and a half minutes to climb down the steep walls using bedsheets. Sinclair had a copy of a real pass obtained from a bribed guard but didn’t know its colour had changed that day from grey to yellow, and the whole attempt collapsed.

The social divide dictated that the British officers had orderlies – read servants – to cook, clean, tidy, polish boots and so on for them, but the orderlies were not invited to participate in escape attempts. Every officer had the right to an orderly under the Geneva Convention, with the strictly stratified military hierarchy deeming that an officer was more valuable than a private and thus more valuable to the war effort by escaping, a “home run” as it was known.

However, the wide social gap between the predominantly upper-middle or upper class officers, some of whom had been to major public schools such as Eton and Harrow, led to festering resentment by the mostly working-class orderlies. The latter eventually rebelled but the mutiny fizzled out, with some orderlies caving in and others transferred out. But it created mistrust.

Lieutenant Peter Allan, a diminutive Scotsman with a kilt (that must be him on the book cover) was small enough to be hidden inside a mattress that was being taken away. He made it to Vienna, ragged and half-starved, where the American consulate, not yet in the war, turned him away, causing him to stagger into a police station and give himself up.

Airey Neave assembled a risible copy of a German uniform that got him out of the inner courtyard but no further before being surrounded by guards. A considerable quantity of escape equipment – a map of the Swiss border traced on silk, a forged identity card, a little money and a tiny compass – was sealed in “a mysterious cigar-shaped container about two and a half inches long” that fitted snugly into his rectum. His fellows laughed and the Germans were offended by his absurd attempt. (Neave became Conservative Member of Parliament for Abingdon in 1953 and was assassinated by the Irish National Liberation Army in 1979.)

Macintye gives many such accounts, including the famous Colditz “glider” built in an attic but unable to be used before the camp was liberated by American soldiers in April 1945. Also, “goon baiting”, the odd theatricals, savage sports, homosexuality, insanity, the victimised Indian doctor who went on hunger strike, the camp’s own Bullingdon Club and its “VIP” captives, the dentist with foot drill and pliers, disguises, plus there are maps and a fine selection of photos. Many tried to escape but many did not want to.  It wasn’t all gung-ho and Boys’ Own.

In fact, the best estimate is that 32 men did get away, with just 15 starting from inside rather than on exercise outside – 11 British, 12 French, seven Dutch, one Pole and a Belgian.

Colditz has been further immortalised by the film “The Colditz Story” starring John Mills in 1955 and a television series with David McCallum in 1972, not to mention an “Escape from Colditz” board game. Perhaps now, after Macintyre’s exhaustive account, there is little to add to this terrific tale.