Dogged by death in the deep

Written by Christopher Osterberg
C.S. Forester died in 1966 and he is not forgotten in The Budapest Times office, where we have a nice little collection of 18 of his books. But they don’t include “Greyhound”, and in fact we were a bit puzzled when it was published recently, because we had never heard of it. It was with some anticipation, then, that we looked forward to a copy. Eventually we discovered that “Greyhound” is actually a retitling of “The Good Shepherd”, which was published in 1955, but then we don’t have that one either, so the anticipation remained.

The reason for this literary sleight of hand is that “The Good Shepherd” has been rescued from semi-obscurity by no less than popular American actor Tom Hanks. He not only stars in the brand-new film “Greyhound” but also wrote the screenplay, so we assume that he is some sort of C.S. Forester fan and enjoys the books. Either that or someone else brought “The Good Shepherd” to his attention.

It’s not the first time that film-makers have turned to Forester’s novels, which generally have a high degree of excitement and adventure. The most famous of these screen adaptations is “The African Queen”, which he published in 1935 and which was memorably filmed in 1951 starring no less than Humphrey Bogart and Katharine Hepburn. The same year, 1951, saw “Captain Horatio Hornblower” featuring Gregory Peck and Virginia Mayo, adapted from three of Forester’s 10 “Hornblower” books (an 11th one was published posthumously, incomplete).

One of Forester’s very first novels, “Payment Deferred”, a crime story published in 1926, was filmed in 1932 with Charles Laughton in the lead role. Forester’s book “The Gun”, published in 1933, became the 1957 film “The Pride and the Passion”, set in the Peninsular War of the 19th century and with a top cast of Cary Grant, Frank Sinatra and Sophia Loren. 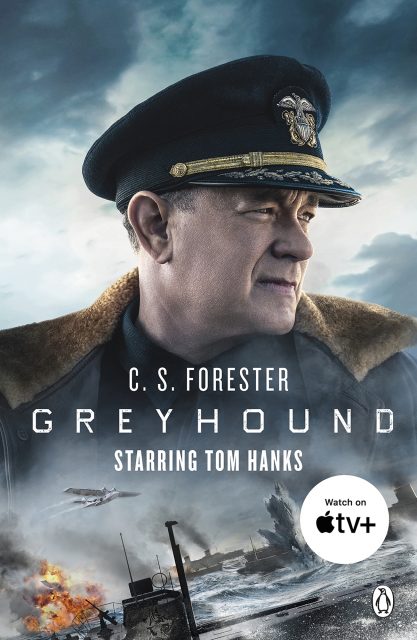 Finally on the film front, we think, British independent television made a series of eight “Hornblower” episodes between 1996 and 2003, with Welsh actor Ioan Gruffudd in the title role (Peck made a much more convincing Hornblower, in our mind’s eye). Two of the “Hornblower” novels, “A Ship of the Line” and “Flying Colours”, were jointly awarded the 1938 James Tait Black Memorial Prize for fiction, and it is for this entire series of excellent naval yarns in Napoleonic times that the author is best remembered.

His other novels such as “The Ship” and “The General” represent skillful storytelling too, and “The Good Shepherd/Greyhound” proves to be no exception. Little wonder, then, that Forester has earned his place on The Budapest Times bookshelves. Whenever we read him we marvel at his great historical accuracy brought about by deep research, his accurate technical detail and the way he makes it all so readable. He had a tremendous interest in naval life in the Napoleonic era, and during World War II he produced propaganda material for the British Ministry of Information, these duties giving him the opportunity to sail on British warships.

In 1937, during a six-week voyage on a merchant ship, Forester began to develop the heroic character Captain Horatio Hornblower (clearly named after the hero of the Nile, Nelson), with whom he would forever be identified, and there are clear links between Hornblower and Commander George Krause, the protagonist of “The Good Shepherd/Greyhound”.

Hornblower, aboard a wooden-hulled sailing ship of the Royal Navy in the early 19th century, came to realise during an early deck watch that “life in the navy, although it seemed to move from one crisis to another, was really one continuous crisis, that even while dealing with one emergency, it was necessary to be making plans to deal with the next”. The exact same is true, a century and a half later, for Krause aboard a destroyer, the USS Keeling, whose radio codename is “Greyhound”, in the Battle of the Atlantic in World War II.

Krause too is a Man Alone: he may have technical help, he may have the backing of his crew, but in the crisis he is facing he can act only on his own judgement, and in case of failure he has only himself to blame.

The man has been 13 years at sea but this is his first command, and he is shepherding an Allied convoy of 37 ships eastwards across the Atlantic Ocean. The supplies they carry are vital for the British war effort. The ships contain nearly 2000 men, with another 800-plus aboard the four escorts. These four are inadequate for the task in hand.

It is not just difficult it is impossible against a determined enemy under good leadership. It would take eight escort vessels and four destroyers to do a good job. There is no air cover until the convoy nears Ireland. The ships are spread over four square miles in strict formation. They are heading east towards infinitely distant safety. This all represents a mass of variables, both human and mechanical.

There is radio silence and a night-time blackout. Flag signals are used. Krause has to make quick life-and-death decisions and exercise great self-control. It is kill or be killed. The German U-boats, an invisible enemy, carry 20 torpedoes each. The four escorts have 50 depth charges each. Sonar is on the guard against the wolfpack. Lookouts with binoculars try to catch a second’s glimpse of a periscope or the sight of torpedo wakes streaking towards the ships.

This is a book about leadership, about the burden of responsibility on a man’s shoulders, and Forester puts us in the pilothouse with Krause as he weighs up his decisions. Strict etiquette must be maintained among the ranks and there is no time for buck fever or wasted words.

Krause is sharply aware that the three escort captains under his command – a Polish destroyer and British and Canadian corvettes – had fought through two and a half years of war and probably resented bitterly the accident that had put them, two-and-a-half stripers, under the command of a newly promoted, three-stripe American who had never fired a shot even though he was nearly 20 years older. He is indeed full of doubt about his capabilities. The US Navy was hard up for qualified officers and he has been tasked with leading his first transatlantic convoy.

It is icy cold. Conditions are murky and vague. Krause’s brain and body are weary after nearly 48 hours or so on his feet. He is thirsty, hungry. He must solve little trigonometrical problems in his head quickly and accurately, give his orders calmly, despite mind-numbing fatigue. He sinks a U-boat, sending 50 Germans to a horrible death, then another. But the lurking submarines torpedo ships in the convoy, including an escort. Krause has to abandon survivors in the water because his own ship is too valuable to be endangered in a rescue. Men die, men he should have protected.

The book is centred almost exclusively on Krause. Other crew are sketched skimpily, if at all. And we learn very little about Krause’s life outside of the pilothouse. Deep into the book we discover that he lost a woman, Evelyn, because she resented all the time he spent in his ships. She could not understand and he was unable to explain.  A clever man could have made his feelings clearer to her. It happened three years ago but the memories are as bitter as ever.

“Greyhound” is a long and intense drama of riveting anti-submarine warfare as the non-stop cat-and-mouse game is played out over just three days, in reality the longest military campaign of World War II, a six-year fight for control of the ocean, costing thousands of lives.

One thought on “Dogged by death in the deep”