A-to-Z introduction to an artistic phenomenon

Written by Christopher Osterberg
There is a small library of books on Norway’s Edvard Munch, including several by the art historian, critic, curator and expert on the artist, Øystein Ustvedt. His latest, “Edvard Munch: An Inner Life”, is intended to offer a wide-reaching, all-encompassing introduction for the lay reader.

Ustvedt couldn’t be better qualified for the task. He is a curator at the National Museum in Oslo, where he has been since 2004, and has presented several exhibitions of Munch’s work. He was the former head of the Stenersen Museum, a now-closed museum of fine arts in the Norwegian capital.

Although Munch (1863-1944) has been the subject of so much scholarship, Ustvedt saw the need for an introduction addressed to general readers. He amply succeeds in this insightful, vibrant overview of Munch’s life and prolific oeuvre, deftly translated from the Norwegian to English by Alison McCullough and illustrated with a wealth of images, 130 in fact.

The author traces Munch’s development beginning in the 1880s, when he broke with past traditions and “successfully positioned himself as a radical revolutionary.” Munch identified an early painting, “The Sick Child”, as an artistic breakthrough: an effort to capture “the fleeting mood” of the sickroom with bold, layered brush strokes, streaming light and blurred details.

Throughout the 1890s, Munch became part of a circle of bohemian intellectuals in Paris and Berlin. An Artists’ Association exhibition in Berlin, however, scandalised some critics, who derided his paintings as “sloppy and unfinished” and not “morally edifying.” Munch welcomed the scandal, soon mounting his own exhibition – for which he charged an entry fee.

Ustvedt recounts Munch’s doomed love affairs, mental breakdown and artistic frustrations, all feeding works that evoked – with swirling movement, brash colours and ghostly images – “the emotional rather than the rational”: anxiety, vulnerability and “the inner life of the soul.”

Though receptive to the “sensibilities of the age,” Munch delved deeply into his psyche, believing that art must be “forced into being by a man’s compulsion to open his heart. All art… must be created with one’s lifeblood”. 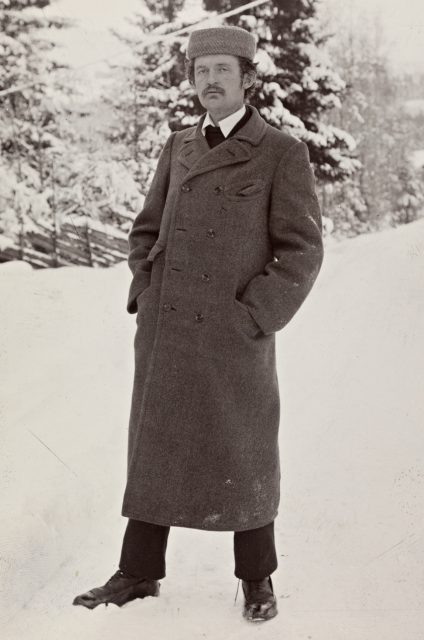 Ahead of the book’s publication, the Norwegian Arts section of the Royal Norwegian Embassy in the UK talked with Ustvedt about what this volume will offer that others do not, his personal views on the artist he has spent so much time researching, and how he would like to expand his horizons in the future.

The interview was conducted by Anna McNay, a freelance art writer, editor and curator. She regularly contributes to a range of art and photography journals, including Studio International, Art Quarterly, The Flux Review, Photomonitor and Elephant magazine. The following is an excerpt.

McNay: When did your interest in Edvard Munch begin and what has kindled it over the years?

Ustvedt: My first encounter with Munch was the docudrama “Edvard Munch” by the English filmmaker Peter Watkins, which was shown on Norwegian television in 1974. The film was about art and an artist but it was also, in itself, a piece of art. It was my first experience of art as a phenomenon. It made a huge impact, especially the almost abstract sequences.

You have written numerous publications on Munch already. What makes “Edvard Munch: An Inner Life” different?

The book is a comprehensive presentation, ‘Munch A-to-Z’ so to speak. While my previous writings have been devoted to particular subjects, this is a pervasive presentation, trying to get a grip on the Munch phenomenon as a whole.

What is the primary audience you hope to appeal to?

The book is intended for a wide and generally interested audience. It is not a publication for Munch scholars, nor is it a biography. It is a monographic introduction to Munch’s art and personality, and to Munch as a cultural phenomenon.

For the full interview, see https://norwegianarts.org.uk/analysing-munch-na-meets-oystein-ustvedt-art-historian/

The new MUNCH Museum on the waterfront in the Norwegian capital Oslo, which opened this November 2021, manages more than 42,000 unique museum objects, including nearly 28,000 unique works of art. This legacy of Edvard Munch is one of the world’s largest collections by one artist.