“Owls of the Eastern Ice” by Jonathan C. Slaght (published by allen lane)

A man, a bird and a book

Written by Christopher Osterberg
Slaght’s book is subtitled “The Quest to Find and Save the World’s Largest Owl”, and the feathered friend in question is the Blakiston’s fish owl, one of nature’s rarest birds. The location is Primorye, a remote corner of the world on the far eastern coast of Russia, north of Vladivostok near where Russia, China and North Korea meet, and where brown bears, tigers and leopards roam the forest floor, under the gaze of the reclusive over-sized owls. 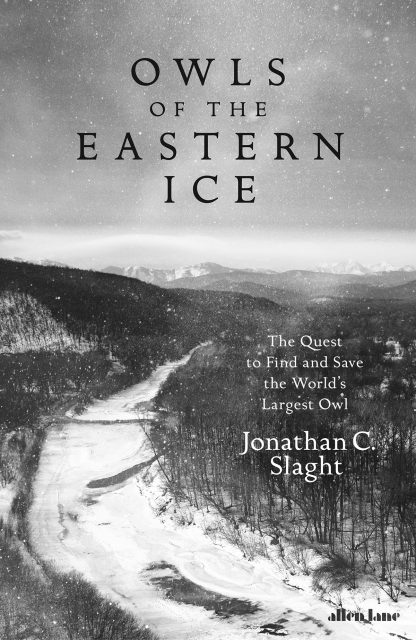 On a hike there in 2000, Slaght and a friend unexpectedly scared an enormous bird in a tree, causing it to fly off, crashing through  branches. He did not know what it was, except that it was an owl bigger than any he had seen, with a two-metre wingspan. Slaght later identified the bird – a dishevelled mass of wood-chip brown with piercing electric-yellow eyes and enormous pointy ear tufts – as the little-seen Blakiston’s fish owl species.

The American had been coming to Primorye for five years at this point, first at age 19 accompanying his father on a business trip, returning for six months study as an undergraduate and then for three years in the United States Peace Corps. He loved the wild region.

Primorye was still largely pristine and commercial interests hadn’t taken over yet. The isolated villages were a step back in time, with low, wood-heated houses and subsistence hunting. The single-room terminal at Terney airport was gateway to a harsh winter environment of raging blizzards and minus-30 temperatures. Snowmobiles, homemade sleds and skis were needed for deep-forest expeditions.

And shady characters meant it could be dangerous. One recent winter a meteorologist stationed there was beaten and left unconscious in the snow, where he froze to death. The community closed ranks afterwards and kept silent about it.

In 2010 a tiger killed and partially ate an ice fisherman. One local man was bent on revenge against owls, killing them on sight after he lost a testicle to a flightless young one that defended itself with its talons when he unwittingly crouched by it to take a dump in the woods.

In 2005, Slaght completed a Master of Science project at the University of Minnesota, studying the impacts of logging on Primorye’s songbirds. Looking for a Ph.D topic in the region, he thought of the chance encounter with the Blakiston’s fish owl, a species not much of which was known about other than that they needed big and old-growth trees with large cavities to nest in and fish-rich rivers to feed from.

These facts allowed the search to be narrowed down. In the frigid northern winters, open water is found only where the current is sufficiently fast-flowing or there are radon gas hot springs. The owls eat mainly salmon year-round, and frogs when they can’t get fish.

By the late 1990s the previously inaccessible forests in Primorye had increasingly become sites of resource extraction, particularly logging, and the owls were vulnerable. There were thought to be no more than 300 to 400 pairs in all Russia. A few hundred kilometres across the Sea of Japan from the Russian coast, in Hokkaido, Japan, fish owls had been reduced to fewer than 100 birds by the early 1980s, from some 500 pairs in the 1890s.

A similar situation could face the fish owls of Primorye, thought to be their global stronghold. But logging and fishing, poaching and encroaching roads threatened to destroy the habitat of this naturally low-density and slow-reproducing species that does not breed every year.

These and other endangered species were protected by Russian law, it being illegal to kill them or destroy their habitat, but Slaght believed that without concrete knowledge of their needs to survive it was impossible to develop a workable conservation plan. His emerging idea for the five-year Ph.D project was to find and study them, and eventually to catch some and tag them with electronic transmitters and leg bands to monitor their movements.

The logging indstry was closing in. In 2000 the Samarga River Basin was opened for timber harvest, allowing roads to be built, but in 2005, after uproar from local communities and regional scientists, the logging company declared itself willing be guided by science and to preserve the critical habitat.

Even so, Slaght recognised the need for a serious fish owl conservation strategy was escalating to save the birds’ breeding and hunting sites. He teamed up with Sergey Surmach, an ornithologist in Vladivostok and the only person working with fish owls in the region.

Surmach supplied a handful of eccentric co-workers, and these tough and colourful Russians crowd the pages of the book, such as field-team leader Sergei Avdeyuk, with his cropped hair, gold teeth, swaggering gait and perpetual cigarette; Andrey Katkov, who regularly drives off the road and is a disturbing snorer par excellence; Shurik Popov, who shins up towering and rotting trees in his stocking feet to seek fish owl nests;, Anatoliy, a hermit with idiosyncrasies but who is a generous and welcoming host, sharing his cabin; and Viktor Chepelev, whose cabin has a plywood pyramid where he sleeps for “energy”.

Professional field assistants they might be but sometimes they worked out of economic necessity rather than an all-consuming love of nature, and an owl was “just another bird”. But they loved vodka; rivers of vodka. When someone brought out a bottle, the rule was to drink it all. Often the bottles didn’t have caps, just thin sheets of aluminum over the top, because once it had been opened, a cap wouldn’t be needed.

Slaght kept a detailed field journal. “How hard could it be?” he wrote as the research began. Well, ask a silly question… in the daunting landscape he encountered floods, fires, blocked roads, storms, vehicles sinking through ice, malfunctioning technologies, night-long sub-zero vigils on riverbanks, hangovers, stampeding boars and drowning deer.

The Minnesotan spent a total 20 months from 2006 year doing fieldwork, mostly in in the cold and dark of winter, funded with grants. He searching for and caught a handful of the birds that were wary of humans and expert at hiding despite their size.

Finding them took patience and a careful eye: an open unfrozen stretch of river, fallen feathers from lost plumage or a massive tree with a huge hole in it to nest. Often they were detected by listening for their singing, in low, hooted duets, or seeing their K-shaped tracks in the riverside snow, big as the palm of a human hand. But they were like ghosts.

“Owls of the Eastern Ice” is an absorbing record of Slaght’s four seasons of fieldwork in the remote forests trying to help safeguard the entire ecosystem. It wasn’t glamorous and it was often dangerous but he couldn’t wait to return from Minnesota, year after year.

Now, Slaght is the Russia and Northeast Asia Coordinator for the Wildlife Conservation Society and he spends about three months each year in Primordye. The Blakiston’s fish owl is a species that continues to need a voice, and by teasing out their secrets Slaght is giving them one. Here’s hoping they survive Man’s exertions.