Dinner had been good. Margaret sat with her book on her lap and watched her husband digesting, an operation to which he always gave much time and thought. As she watched he put his cigar down without looking and used his free hand to turn the page of his paper. Margaret found herself thinking with some pride that unlike many men she had heard about, her husband did not fall asleep after a particularly good dinner.

She flipped the pages of her book idly; it was not interesting. She knew that if she asked her husband to take her to a movie, or out for a ride, or to play gin rummy, he would smile at her and agree; he was always willing to do things to please her, still, after ten years of marriage. An odd thought crossed her mind: she would pick up the heavy glass ashtray and smash her husband over the head with it.

‘Like to go to a movie?’ her husband asked.

‘You look sort of bored,’ her husband said.

‘Were you watching me?’ Margaret asked. ‘I thought you were reading.’

‘Just looked at you for a minute.’ He smiled at her, the smile of a man who is still, after ten years of marriage, very fond of his wife. The idea of smashing the glass ashtray over her husband’s head had never before occurred to Margaret, but now it would not leave her mind. She stirred uneasily in her chair, thinking: what a terrible thought to have, whatever made me think of such a thing?

Probably a perverted affectionate gesture, and she laughed. ‘Funny?’ her husband asked. 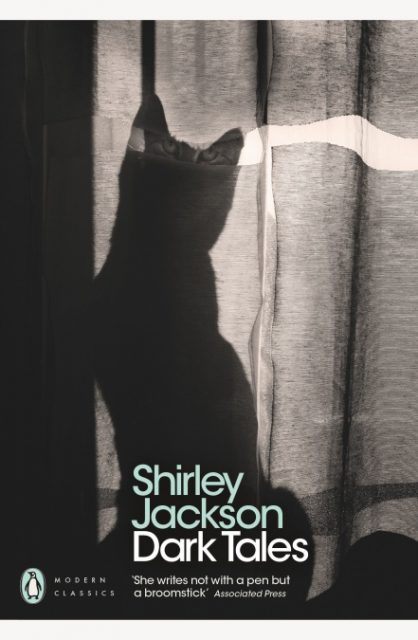 She stood up and crossed the room to the hall door, without purpose. She was very uneasy, and looking at her husband did not help. The cord that held the curtains back made her think: strangle him. She told herself: it’s not that I don’t love him, I just feel mor- bid tonight. As though something bad were going to happen. A telegram coming, or the refrigerator breaking down. Drown him, the goldfish bowl suggested.

Look, Margaret told herself severely, standing just outside the hall door so that her husband would not see her if he looked up from his paper, look, this is perfectly ridiculous. The idea of a grown woman troubling herself with silly fears like that – it’s like being afraid of ghosts, or something. Nothing is going to happen to him, Margaret, she said almost aloud; nothing can happen to hurt either you or your husband or anyone you love. You are perfectly safe.

‘No, dear,’ Margaret said. ‘Just getting a drink of water.’ Poison him? Push him in front of a car? A train?

I don’t want to kill my husband, Margaret said to herself. I never dreamed of killing him. I want him to live. Stop it, stop it.

She got her drink of water, a little formality she played out with herself because she had told him she was going to do it, and then wandered back into the living room and sat down. He looked up as she entered.

‘It’s the weather, I guess,’ Margaret said. ‘Heat always bothers me.’ ‘Sure you wouldn’t like to go to a movie?’ he said. ‘Or we could go for a ride, cool off.’

What would I do without him? she wondered. How would I live, who would ever marry me, where would I go? What would I do with all the furniture, crying when I saw his picture, burning his old letters? I could give his suits away, but what would I do with the house? Who would take care of the income tax? I love my husband, Margaret told herself emphatically; I must stop thinking like this. It’s like an idiot tune running through my head.

She got up again to turn the radio on; the flat voice of the announcer offended her and she turned the radio off again, passing beyond it to the bookcase. She took down a book and then another, leafing through them without seeing the pages, thinking: it isn’t as though I had a motive; they’d never catch me. Why would I kill my husband? She could see herself saying tearfully to an imaginary police lieutenant: ‘But I loved him – I can’t stand his being dead!’

‘Margaret,’ her husband said. ‘Are you worried about something?’

‘You really seem terribly upset tonight. Are you feverish?’

‘Come over here and let me feel your forehead.’

She came obediently, and bent down for him to put his hand on her forehead. At his cool touch she thought, Oh, the dear, good man; and wanted to cry at what she had been thinking.

‘Shall I make you a drink?’ he asked. ‘Or something like lemonade?’

They say if you soak a cigarette in water overnight the water will be almost pure nicotine by morning, and deadly poisonous. You can put it in coffee and it won’t taste.

‘Shall I make you some coffee?’ she asked, surprising herself.

He looked up again, frowning. ‘I just had two cups for dinner,’ he said. ‘But thanks just the same.’

I’m brave enough to go through with it, Margaret thought; what will it all matter a hundred years from now? I’ll be dead, too, by then, and who cares about the furniture?

She began to think concretely. A burglar. First call a doctor, then the police, then her brother-in-law and her own sister. Tell them all the same thing, her voice broken with tears. It would not be necessary to worry about preparations; the more elaborately these things were planned, the better chance of making a mistake. She could get out of it without being caught if she thought of it in a broad perspective and not as a matter of small details. Once she started worrying about things like fingerprints she was lost. Whatever you worry about catches you, every time.

‘Have you any enemies?’ she asked her husband, not meaning to.

‘Enemies,’ he said. For a moment he took her seriously, and then he smiled and said, ‘I suppose I have hundreds. Secret ones.

‘I didn’t mean to ask you that,’ she said, surprising herself again.

‘Why would I have enemies?’ he asked, suddenly serious again, and setting down his paper. ‘What makes you think I have enemies, Margaret?’

‘It was silly of me,’ she said. ‘A silly thought.’ She smiled and after a minute he smiled again.

‘I suppose the milkman hates me,’ he said. ‘I always forget to leave the bottles out.’

The milkman would hardly do; he knew it, and he would not help her. Her glance rested on the glass ashtray, glittering and coloured in the light from the reading lamp; she had washed the ashtray that morning and nothing had occurred to her about it then. Now she thought: it ought to be the ashtray; the first idea is always the best.

She rose for the third time and came around to lean on the back of his chair; the ashtray was on the table to her right, now, and she bent down and kissed the top of his head.

‘I never loved you more,’ she said, and he reached up without looking to touch her hair affectionately.

Carefully she took his cigar out of the ashtray and set it on the table. For a minute he did not notice and then, as he reached for his cigar, he saw that it was on the table and picked it up quickly, touching the table underneath to see if it had burned. ‘Set fire to the house,’ he said casually. When he was looking at the paper again she picked up the ashtray silently.

This story, “What a Thought” is from Shirley Jackson’s book titled “Dark Tales”, published by

Penguin Modern Classics. The publisher calls her “the queen of American gothic”.