52 years in a wheelchair, so far

Written by Christopher Osterberg
The Vietnam War was an American disaster. Iggy Pop, who performed in Budapest last year, avoided it by acting crazy at his draft hearing. Creedence Clearwater Revival sang about the “Fortunate Son”s of senators who were assigned at home instead of fighting in the jungles. George W. Bush’s military service in safe Texas has dogged him ever since. Country Joe and the FIsh sang about being “the first one on your block to have your boy come home in a box”. Some 58,000 Americans came home in boxes. Ron Kovic went to war willingly, twice, and returned paralysed from the chest down. 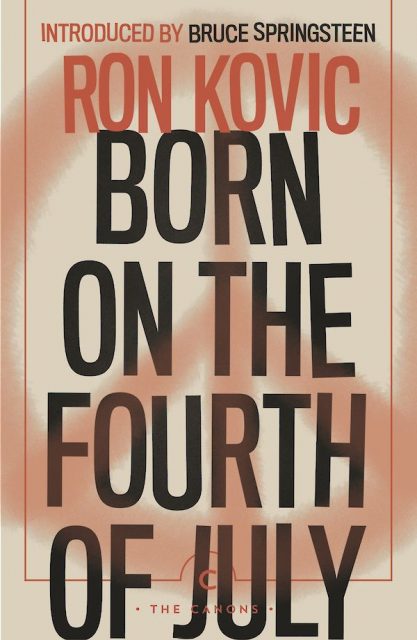 Kovic wrote a book about it in 1976 and the book was filmed by Oliver Stone in 1989 with Tom Cruise as Kovic. This latest edition of “Born on the Fourth of July” contains a Foreward by Bruce Springsteen written in 2016 and an Introduction that Kovic added in 2005 as he “watched in horror the mirror image of another Vietnam unfolding” in Iraq, where tens of thousands of innocent citizens, many of them women and children, had already been killed.

It is an extremely moving book that hits you like a slap in the face, or a bullet, or a piece of shrapnel, or a grenade, or a bomb. This should make everyone sick and angry about young men being sent off to the other side of the world by immoral politicians and warmongers to kill men, women and children in the name of ideology. What happened to Kovic shouldn’t happen to anyone. It shouldn’t happen to our unfortunate sons. But it still does: it goes without saying that men have learned nothing from the “war to end all wars” or any other conflict in Europe, Africa, Korea, Vietnam, Iran, Afghanistan, Syria, Yemen and all the rest.

The world looked great for Kovic, born in Ladysmith, Wisconsin, on July 4, 1946, the United States of America’s annual Independence Day. It was a propitious birth, July 4 being the national day of the United States and commonly associated with fireworks, parades, barbecues, carnivals, fairs, picnics, concerts, baseball games, family reunions, political speeches and ceremonies.

Kovic was a good all-American boy, raised a proud patriot in a family with a history of military service. While his mother tended Ron and his five younger siblings at home, his father worked as a supermarket clerk. Kovic played in the woods and joshed with his mates, then later excelled in wrestling, track and baseball, but not at academics.

He considered a career as a professional baseball player but found himself imagining a different path, inspired by President John F. Kennedy’s powerful “Ask not what your country can do for you; ask what you can do for your country” speech at his inauguration in Washington in 1961. Just a few months after graduating high school, in September 1964, a local military recruiter signed him into the United States Marine Corps.

Kovic volunteered for duty and was deployed to Vietnam in December 1965. In the confusion of combat, he accidentally shot dead a young US corporal (what is euphemistically called “friendly fire”, though Kovic does not use the term). His superiors refused to hear his confession, which only deepened his moral anguish. After a 13-month tour of duty he returned home, still believing in the importance of the war to stop the spread of communism in Vietnam.

He wanted to return. On his second tour, during a night raid, Kovic and fellow soldiers were ordered to shoot into a small Vietnamese hut where they believed enemy soldiers were hiding. But the hut held only women and children left screaming, mangled or dead. Kovic was horrified.

Then in January 20, 1968, while leading his squad across an open area in the Demilitarised Zone, Kovic was shot. His terrible guilt had led him to purposely expose himself to enemy fire. He suffered a spinal cord injury that would leave him paralysed from the chest down. He was carried to safety and spent a week in an intensive-care ward in Da Nang before being returned to the US for further treatment. The government awarded him a Bronze Star with a “V” (denoting valour) and the Purple Heart for his service, courage and injuries.

Slowly, the wheelchair-tied Kovic came to understand the horror of it all. He received apathetic treatment at the poorly equipped veterans’ hospital and felt betrayed by his government, which didn’t truly respect its soldiers’ sacrifices. Paralysed physically by his life-changing injury and tortured psychologically, Kovic had no answers to the questions he faced about war.

However, he had a unique voice to share with audiences and sought an outlet for his growing outrage in activism. He began speaking out for peace at anti-war rallies and supported Vietnam Veterans of America, a non-profit organisation dedicated to the support and care of veterans and their families.

Kovic and two other disabled ex-soldiers disrupted President Richard Nixon’s acceptance speech at the 1972 Republican National Convention at Miami Beach. He famously told a reporter: “I’m a Vietnam veteran. I gave America my all, and the leaders of this government threw me and others away to rot in their VA (Veterans Affairs) hospitals. What’s happening in Vietnam is a crime against humanity.”

In his short introduction to this new edition, Springsteen says he devoured the book after finding it in a book rack at a small-town drugstore while on a cross-country drive with a friend in 1978. He became caught in the book’s “unrelenting power” and fell under its spell. “Read it and rejoice. Read it and weep,” he concludes.

Kovic didn’t use a ghost writer but he didn’t really need one because his rage carries him through. He wrote the book quickly in a cathartic burst. Mainly, he writes about his pre-war and post-war experiences first and, rather frustratingly, it isn’t until towards the end that we get fuller details of what actually happened to him in Vietnam. Occasionally he switches from first-person singular to third-person singular, which is a bit confusing at first, and there are a few short stream-of-consciousness passages where he lets it all hang out.

None of this matters, on a literary level. His book is a searing, heart-rending account, not to be missed.