Opera House about to burst into song again

Written by Christopher Osterberg
The nation’s leading citadel of art, the Hungarian State Opera House on Andrássy út, will reopen on March 12 after restoration and modernisation work that lasted nearly five seasons. The historic building, construction of which began in 1875, has been restored to its original glory and augmented with the most modern technologies for the benefit of the institution’s artists, employees and audiences.

Funded by Emperor Franz Joseph I of Austria-Hungary and the city of Budapest, this perfect example of a neo-Renaissance opera house opened to the public on September 27, 1884. It was originally named the Hungarian Royal Opera House but has also been known as the Ybl Palace, after its designer, 19th-century Hungarian architect Miklós Ybl (1814-91), whose impressive legacy also includes the Várkert Bazár, the main building of Corvinus University and lavish constructions around the Palace Quarter.

The Opera House is a work of art in itself, with a richly decorated exterior with elements of Baroque that lend exclusivity to the wonderful building. The paintings and sculptures inside were created by famous Hungarian artists such as Bertalan Székely (1835-1910). Ferenc Erkel (1810-93), who wrote the music for the Hungarian national anthem, was the house’s first music director, and he was also known for founding the Budapest Philharmonic Orchestra.

It has been more than 30 years since the Ybl Palace was renovated. The latest works involve giving new functions to many rooms and solving a number of problems faced by the artists during the performance of their work.

The renovation extends to five main areas: stage engineering, auditorium acoustics, piping, changing the functions of rooms and the restoration of historical decorations. The most important element of the investment project has been the replacement of the stage engineering system, which was installed in 1984 and did not meet today’s requirements of faster manoeuvrability, lower noise levels, variability and exact fitting. 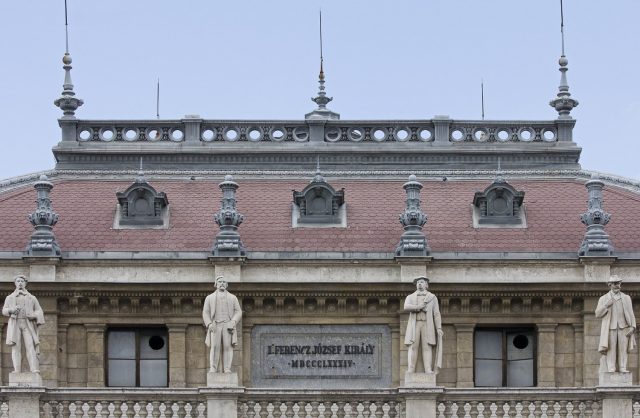 Although the steel framework based on the spiral staircase and the lifts was left untouched, new overhead equipment was fitted. As regards the stage layout, the present solution of using six passageways and 10 side podiums was retained, but the height of the passageways was increased. The machines for the fly system (the space above the stage where scenery and lighting can hang out of audience view) used East German technology, and the lighting was also outdated.

The changes to the orchestra pit and making it mobile serve to improve acoustics. The orchestra pit was renovated in 1912, when it was moved under the stage. Its front concrete parapet has been removed to allow it to return to its original size and make use of the original intent of using the area as a reverberation chamber.

The amount of drapery was also decreased to reduce its sound-deadening effect, and an abat-voix (a device for reflecting sound) was installed behind the stage. Federico Cruz-Barney, who participated in designing the acoustics of the Palais des Beaux-Arts concert hall in Brussels and the Paris Philharmonics, was consulted on the Opera’s acoustic issues. 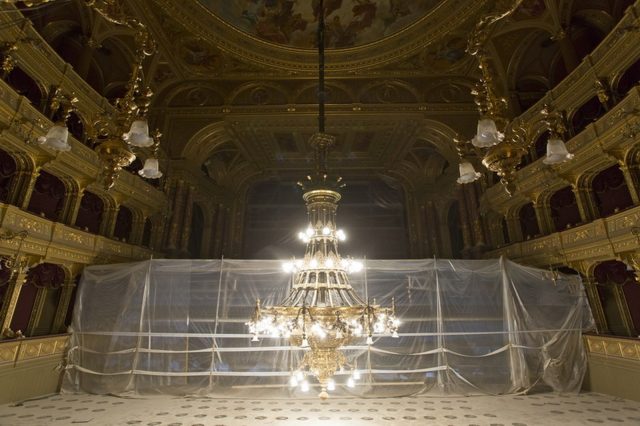 The seats on the ground level have been centred and the number of seats restored to the original amount. Ventilation throughput has been increased. Gold paint has been restored in the auditorium, the main buffet, the Royal Stairs, the Gallery and the Main Stairs. Seccos – painting on dry plaster – were dry-cleaned and wood carvings repaired. The building’s parquet floors and copper railings were in very bad shape and needed to be repaired. Water insulation in the basement has been improved. Handicapped access has been provided to lifts, and one of the ground-floor rooms previously used as a workshop will be used as a commemorative hall open to the public.

The fact that there was no fire alarm equipment in the building clearly shows the state of things pre-renovation, and this also has been updated. The threat of fire was real as old gas lines were used to lead electric wires that were originally designed for lower ampere loads. Plans also included the thermal insulation of windows, cleaning the façade, insulating the rainwater runoff conduits, expanding the decorative lighting network, replacing the statue park, installing an IT system in the entirety of the building, developing the mobile phone signal repeater, audience information and WiFi networks, updating the broadcast system and modernising the safety technology system.

The modernisation includes changing the functions of a number of rooms within the Opera, and the carpentry workshop, men’s and women’s sewing facilities, and the painter’s, sculptor’s, locksmith’s, milliner’s, shoemaker’s, goldsmith’s and upholsterer’s workshops are all being relocated to Eiffel Art Studios. Internationally famous guest stars will find better dressing rooms. Audiences will find an improved Opera Shop and Opera Café.

A team of special painters worked on renovating the floor coverings in the areas trafficked by the public, with the original beauty of the woodwork returned everywhere as a result of patient, meticulous work. The marble doorframes in the main staircase had once been painted white but have now been returned to their glory. The columns in the ground floor cloakroom, painted green to resemble marble, had been simply painted over with brown: they too have been restored. 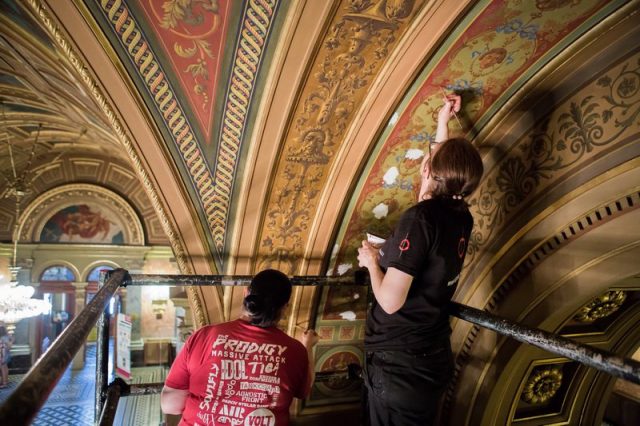 Although the ceiling seccos in the Foyer and the Main Staircase painted by Károly Lotz were restored between 1980 and 1984, they were in need of touching up and cleaning. The statues and paintings have also been protected, and textiles and tapestries were the subject of work.

Following the closure of the Opera House for renovation and modernisation, the Hungarian State Opera made basic restoration works so as to reopen the Erkel Theatre in District VIII in 2013 with the aim to have a suitable venue for performances to take place. With the reopening of the Opera House, it is time for the Erkel Theatre to undergo thorough renovation works, but it will continue to serve as a rehearsal space and will house guest performances, while the main focus will once again fall on the historic Opera House as well as the Eiffel Art Studios in District X, the home of contemporary and innovative productions.

The Eiffel Art Studios are housed in the largest indoor complex in Hungarian railway history, a system of vast covered spaces unique in Europe, the Northern Railway Maintenance and Engineering Works built between 1884 and 1886. The Eiffel Hall was large enough to repair up to 96 huge steam locomotives at a time. After years of alterations and renovations, starting from 2020 it has been home to the Hungarian State Opera’s new logistics and art centre.

See opera.hu for programmes. It is advised that in accordance with official COVID guidelines, wearing a facemask is mandatory but seated performances can be attended without an immunity certificate.