Written by BT/MTI
A photographic exhibition by Hungarian painter and photographer Adam Balogh in celebration of Georgia is on display at the Pesti Vigado until November 21. The opening was hosted by Georgian Ambassador to Hungary Zaal Gogsadze and his embassy staff before a full house on November 11, a day before access by the public.

Ambassador Gogsadze welcomed the guests, whom he said had gathered to celebrate his homeland with its astonishing historical sights, enchanting landscapes so beautifully depicted in the photos, its unique alphabet, traditions, magical music and wine and, most importantly, its warm-hearted citizens, known for their hospitality.

The ambassador said the exhibition, “O Mysterium, O Georgia!”, is the second series of photos by Adam Balogh dedicated to Georgia. “Here I recall the historical parallel associated with outstanding Hungarian painter and graphic artist Mihaly Zichy, who lived in Georgia in the 19th century and who was commissioned by the Literacy Society of Georgia to illustrate ‘The Knight in the Panther’s Skin’, a Georgian epic poem of the XII century by Shota Rustaveli,” Ambassador Gogsadze said.

“Zichy was reading the poem while working on the illustrations and became so fascinated by the poem that he presented his works to the Georgian people as a gift. In my country, Mihaly Zichy is considered as a ‘Georgian painter’.

“Adam, like Mihaly Zichy, captures and perceives Georgia’s spirit, and most importantly he manages to reflect it in his photos in a very unique way. I would like to thank Adam for his remarkable work. I hope that the Covid reality will soon end, and you will have a chance to visit my country and explore its beauties and rich cultural heritage for yourself. On this optimistic note I declare the exhibition open.”

The ambassador offered special thanks to Adam Balogh, “hero of the occasion, for his enthusiasm, sharing beauty and his vision of the world with us”. Also the embassy team for organising the event.

Bence Takacs spoke to the gathering about Balogh’s works. He said: “The exhibition ‘O Mysterium, O Georgia!’ organised by the Embassy of Georgia to Hungary is the second series of photos by Adam Balogh, Hungarian painter-photographer, dedicated to Georgia, its people, cultural heritage, traditions and landscapes.”

He quoted Adam Balogh: “Georgia’s mountains and birds are still calling God while singing hymns in the voice of colourfully-clad girls in the depth of an ancient monastery, thus presaging the greatness and beauty of Creation. It is a country that presents the love of God, the creator of all things in each and every detail.” 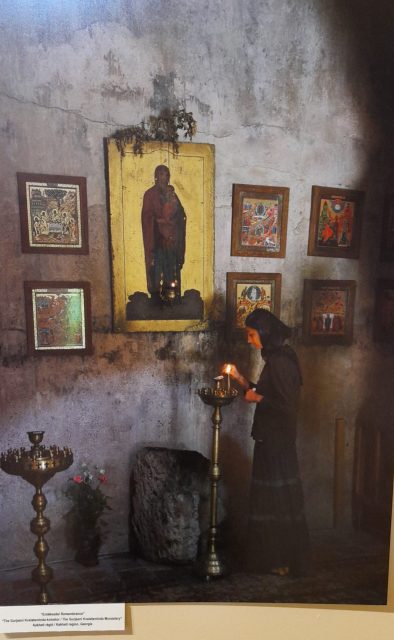 This tribute was paid by Éva Keleti (1931-), artist and holder of Hungary’s prestigious Kossuth and Balazs Bela awards: “Painter or photographer? I do not know. What I do know is that these two arts are very close to each other. It does not matter if the artist’s message is communicated to us by way of a paintbrush or a camera. Tools do not matter for Adam Balogh. Canvas or photosensitive paper? They are all the same for him.

“He takes us to distant worlds. We can be a part of the Universe and a companion to his travels. As a painter he roams an abstract and spiritual world, while as a photographer he seeks the reality.

“He travels the world, but no matter if he is in Georgia, Hungary or perhaps the Middle East, his focus is always on the same: the human being. Children’s marvelling eyes, mysterious stone walls, cities, churches and squares with tales of centuries: these are Adam Balogh’s topics.

“No wonder he has so many exhibitions and his pictures are treasured pieces in private and public collections as well. Adam Balogh is the eye of the world and the keeper of events.”