Chocolate and politics side by side at Parliament Square

Written by Alexander Stemp
I really enjoy coming across unusual and unexpected things, such as recently when I was passing through central Pest on the number 2 tram, taking in the high splendour of the Duna River and the opposite Buda side until my arrival at equally splendid Kossuth Lajos tér. The initial intention was to take the more mundane number 70 bus out of the city, but whilst on my way from here-to-there a very unexpected pleasure stopped me from proceeding further.

I am very fond of the Szamos cukrászda/tea shops, and the one on the corner of Kossuth Lajos tér stands out due to its prime location. So much so that when the daylight is at its pivotal best, an unexpected reflection of the “pudding-esque” Országház parliament house appears upon the main window.

But when inside, be assured that all political emphasises disappear, as the late but still estimable chocolate and marzipan connoisseur Mátyás Szamos and his dedicated staff then take charge. Making my way upstairs from the ground-floor buffet I discovered the deluxe “Aladdin’s Cave” of the one-off Szamos Chocolate Museum and shop. This latter is draped in luxuriant, traditional décor and filled with numerous varieties of fine, reputable sweets with an assortment of exquisite fillings. Need I say anything more?

This leads to the main feature, the museum, which, delighted to say, hosts a remarkable exhibition of specialised collectables, all sweet-related. This splendid tribute to the late master and his trade took 30 years to complete. It opened in 2016 and highlights the chocolate enterprise from Empire times onwards and throughout the 20th century.

Among the exhibits are ample amounts of industrial items and artistic artefacts from all over the world. These range from utensils to moulds for chocolate figurines, general industrial tools, a mini stove, much artwork and so forth. All have been beautifully restored with meticulous care by maestro Gyula Kelényi, a partner in the Szamos family business. 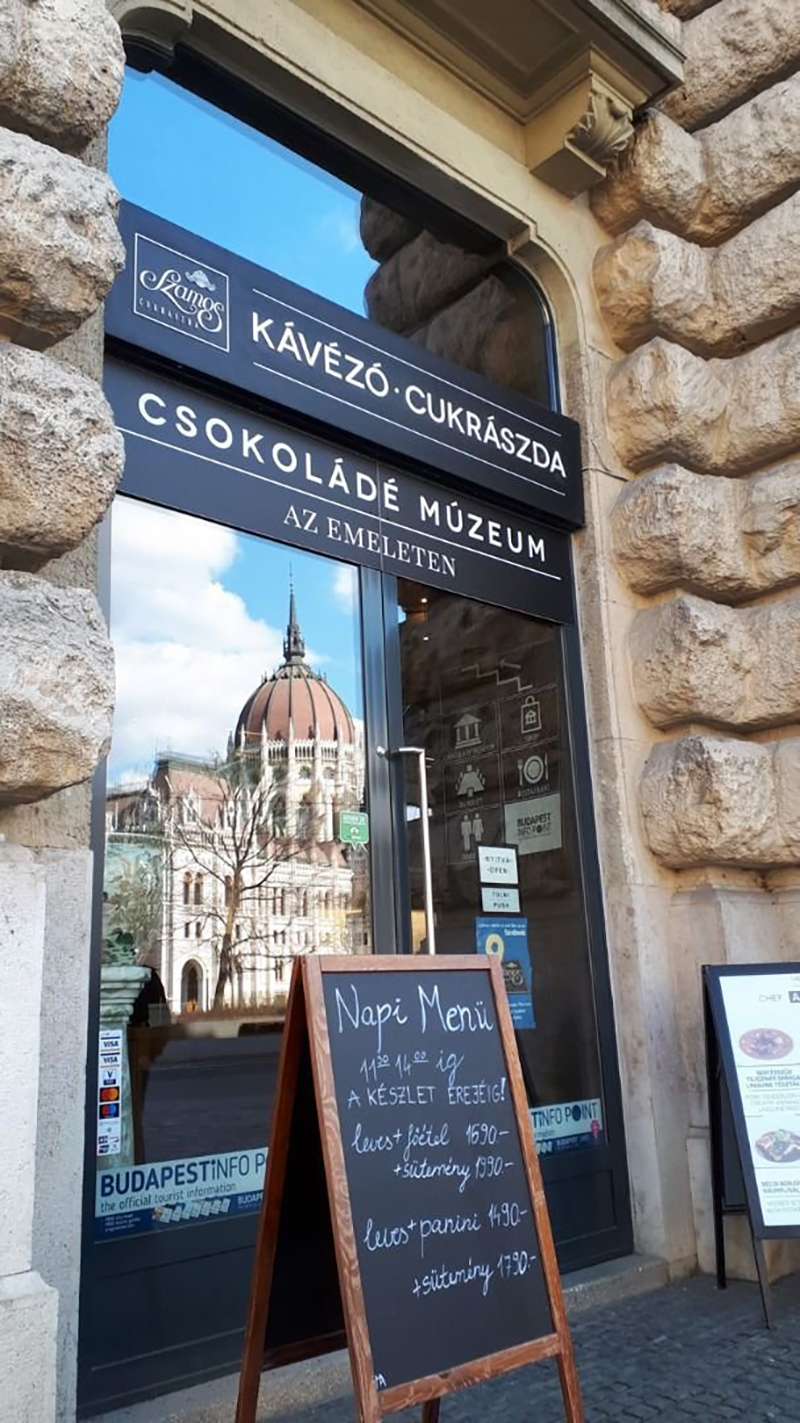 Although the greater emphasis at this particular locale is with chocolate, there are some outstanding marzipan sculptures, such as the nearby Parliament Building, made with fine architectural precision. Also in marzipan are Hungary’s symbolic crown jewels and a life-sized and life-like young waitress weighing in at 75 kilogrammes. More of these incredible creations are to be found at the Szamos Marzipan museum in Szentendre.

A vintage kitchen, clearly from former imperial times, is to be seen, with exquisite Herend porcelain cups and saucers for drinking chocolate. All rounds off with a short film that gives a brief insight into cocoa bean and chocolate production, with origins in equatorial plantations in Central and South America and West Africa.

Cocoa beans, high in nutrients, are known as “Food from the Gods”, albeit slightly and surprisingly bitter. They provide additional energy, are good for the heart and have many health benefits. But this is another case study altogether.

These raw products still supply European chocolate enterprises today, mainly to Belgium, and were delivered to Hungary for Mr. Szamos’s attention. Originally Mladen Szavits (1918-2002), a young boy of Serbian origin, he is better known in Hungarian terms as Mátyás Szamos. He grew up in the Serbian community of Szentendre and his lifelong journey concerning all-things-sweet began with an apprenticeship in 1935 at the still well-known and commendable József Auguszt confectioner.

A turning point came when a “Danish confectioner” (name unknown) was passing and demonstrated to Szamos the art of making marzipan and almond paste roses. These were clearly more alluring and assimilable than sugar ones, so revolutionised Szamos’s way of thinking. He perfected the art and it became his trademark. Decades later, as many as a million of these decorative and edible roses have been sold.

The first Szamos shop opened in downtown Pest in 1987. This and others may have opened sooner had it not have been for the socialist system that not only generally denounced private businesses but also dismissed marzipan as “too bourgeoisie”, offering inferior sugar or nougat creations instead.

By the mid-1990s, the upmarket Szamos enterprises were flourishing at prominent sites around the city as well as in Szentendre, Esztergom and Eger. Today the company’s main base, alongside two factories that bake cakes to perfection, is in Pilisvörösvár, on the western outskirts of Budapest. Plus, there are chocolate workshops and courses held at the Vörösmarty tér premises in District V. See www.szamos.hu

The renowned Mátyás Szamos was eventually honoured with the Order of Merit of the Republic of Hungary in 1999 for his outstanding craftsmanship and excelling family-run business.

And then, before I knew it, my time at the “Chocolate Palace” was over. The clock theoretically “struck 12” and it was “pumpkin time”, just as in “Cinderella” (as read often enough to my young children). I left the beguiling venue in haste to resume my original routine.

Looking towards the Parliament across the square while making my way to the number 70 “carriage”, I sensed that politics and world affairs might change for the better if sweet-toothed politicians discuss their business at this charming chocolatier rather than elsewhere. As for everyone else, this is an enticing outing that comes highly recommended.

But it needn’t end here, because one can still visit the Marzipan museum in Szentendre. This is an unpredicted “Marzipan Madame Tussauds” as one is greeted by life-sized marzipan structures of Princess Diana and Michael Jackson. Pose for surreal selfies, as this is the nearest one will get to sighting these departed but still remembered icons.

They are accompanied by a host of Hungarian legends (but not so large), such as Petőfi Sándor, plus Mickey Mouse, Alice in Wonderland, a Bethlehem nativity scene, super heroes and so forth. It is a phantasmagorical marzipan wonderland, and I wonder whether there might be a candy PM Viktor Orbán on parade when it comes to next time?

Or perhaps I could ask for a mini personalised one of myself to present to Nagy-mama as a memento, if the price is right. But I did not dare to ask. A creation of local singing legend Halász Judit at the Vígszínház would be more appropriate.

Without doubt, Mátyás Szamos, who is laid to rest close by, excelled as a master of his trade. His expertise has clearly been passed on to the next generation of confectioners and customers alike. These delights from this top-end confectioner will continue being served to a grateful public for much time to come.

The museum will reopen on June 22.